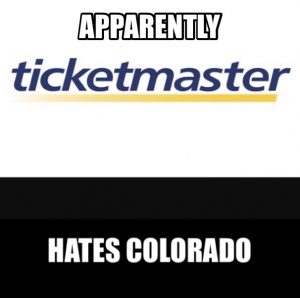 While it’s no secret that Ticketmaster is one of the greediest institutions in America, they have officially reached new levels of voracity. In the past I’ve written articles about their sketchy business practices because as a lover of live music I’ve always hated that I had no choice but to give money to a company I loathe. Three examples:

Thirteen years after the Schlesinger v. Ticketmaster class action lawsuit was filed “alleging that Ticketmaster failed to fully disclose to consumers all aspects of its UPS and Order Processing Fees,” the case has final been settled. According to http://www.ticketfeelitigation.com, Ticketmaster owes “approximately $386 million in Discount Codes to Class Members, which will be good for four years and will allow Class Members to receive discounts for future ticket purchases and/or receive additional discounts on future UPS ticket deliveries.”

The website also explains the three types of vouchers:

But of course Ticketmaster either wasn’t smart enough to anticipate that releasing all these vouchers on the same day would crash the site or they knew it would happen and didn’t care. The details surrounding this case go on and on and there are all kinds of stipulations attached to the so-called free tickets because, as we know, Ticketmaster doesn’t really give anything away for free. Although this entire scenario is as ridiculous as it is unsurprising, my biggest issue, of course, is that there are no “eligible” shows in Colorado! Yep, you read that right. There is a list of hundreds of eligible shows that I can supposedly use my vouchers for and the closest one is in Albuquerque, New Mexico. Are you serious?

If all of that wasn’t tricky enough here is a little more: “Ticketmaster announced that they will provide $10 million in ticket vouchers through May 2017. The number of free tickets after that will depend on how many $2.25 and $5 vouchers are used. The company has to pay $42 million over four years and at least $10.5 million every year. If the value of the vouchers used falls short of that goal, Ticketmaster will release more free tickets to make up the difference.”

Who is tracking that? How can that person/company possibly know for sure?

In the meantime, I apparently need to plan and pay for a road trip or airline ticket to sit on a lawn in another state if I’m going to see bands I like on Ticketmaster’s dime. But I can’t look anything up because “the website is currently experiencing technical difficulties from the numbers of people trying to access the voucher section.” Sigh.