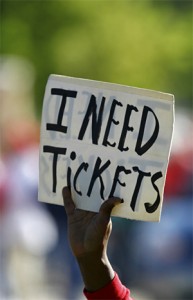 While it is common knowledge that Ticketmaster has made buying concert tickets one of the most frustrating processes this side of TSA taking over airport security (see my April 14 post), the City of Baltimore has brought up a new reason why their service fees are unacceptable.

Filed in the Northern Division of U.S. District Court in Maryland, Live Nation is now facing a class action lawsuit in Baltimore.  This lawsuit takes a new approach as it accuses Live Nation’s Ticketmaster division of being a scalper by charging above face value for tickets, which is against the law in the City of Baltimore.

What a genius move on Baltimore’s part!  Accusing Ticketmaster of being just like the sketchy guy who stands on the street corner in front of a venue with a cardboard sign is brilliant!

The lawsuit states that Ticketmaster “consistently and regularly sell tickets to events in Baltimore City at prices far exceeding the face value of those tickets” and that it “imposes and conspires to impose charges in addition to the face value of tickets denominated as ‘service charges,’ ‘convenience fees,’ ‘processing fees’ and other unlawful charges.”

Here’s some more good stuff: “Even if the Defendants had been licensed ‘ticket agencies’…their activities described herein still would constitute wholesale violations of Baltimore City scalping laws.  These laws, designed to protect the public, are simply ignored by the Defendants, who dominate the ticket sales market for events in Baltimore City.”

The lawsuit was filed by Baltimore resident Andre Bourgeois, who bought tickets in 2009 to see Jackson Browne.  The tickets had a face value of $52 each but then Ticketmaster “allegedly” tacked on additional services charges of $12 per ticket, making the ticket price skyrocket 20 percent.

According to the lawsuit, since the city prohibits ticket agencies from adding convenience charges that are over $0.50 above face value, Ticketmaster broke the law as it routinely adds fees way over the allowed amount.

“The Defendants…have completely ignored the restrictions of Baltimore City law and have criminally overcharged their customers,” the lawsuit states. “They have reaped huge financial windfalls from operating outside of the rules which apply to them.”

The lawsuit is accusing Ticketmaster of the following: Money Had and Received, Negligent Misrepresentation, violation of the Maryland Consumer Protection Act, Deceit by Non- Disclosure or Concealment and violation of the federal Racketeer Influenced Corrupt Organizations Act (RICO).

I’m impressed with the persistence of both Mr. Bourgeois and the City of Baltimore.  They are not taking what Ticketmaster does lightly and are serious about making them pay.  And they should because Ticketmaster steals from the people (the music-loving public) who make them rich and it’s ridiculous.  Based on 2009 public finance reports, Ticketmaster generated over $1 billion in revenues as a result of the fees, which were charged on tickets worth a total of $8 billion.

Game on Ticketmaster.  What’s your next move?