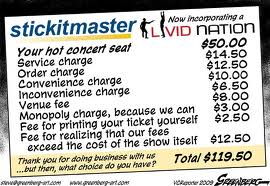 After ripping people off for more than a decade, Ticketmaster finally has to pay some fees of its own. As a result of a recent class-action settlement many fans who have been paying close to 40 percent in horrendous “convenience” fees will be getting some of their hard earned cash back.

To settle an eight-year-old lawsuit over its fees for shipping and “order processing,” Ticketmaster will offer two kinds of purchase credits to people who bought tickets on its Web site from October 21, 1999, to October 19, 2011. For each order, a customer will be eligible for $1.50 off future transactions and people who paid for expedited ticket delivery by UPS can get a $5 credit.

Sounds good right? Well of course there are a few minor details: Credits must be redeemed within four years and cannot be used for events at theaters operated by A.E.G. Live which is the rival of Ticketmaster’s parent company, Live Nation Entertainment. Customers are limited to 17 credits of each kind and only residents of the United States are eligible.

While these details sound reasonable I’m wondering how the hell Ticketmaster is going to credit the millions of people (including me) who have purchased concert tickets through them over the past 12 years. How do you even begin to do that?

The Los Angeles Superior Court gave preliminary approval to the settlement last month and this week notices about it began to go out by email. A final court hearing is scheduled for May 29, 2012.

A little background: The case began in 2003 after two men bought tickets to Wilco and Bruce Springsteen concerts. They filed a joint lawsuit arguing that Ticketmaster’s UPS charges and order processing fees were excessive and that the company did not disclose that it profited from those fees. Nationwide class-action status for the claim was affirmed by the court last year. (In April 2011 I wrote about the Maryland U.S. District Court lawsuit and in July 2011 I talked about the frustration I share with people all over the country about the horrendous fees). In October, Ticketmaster settled another class-action suit for $16.5 million that began when two fans in New Jersey sued over the sale of tickets for a pair of Springsteen concerts in 2009.

But legal issues with Ticketmaster actually started way before 2003. In 1994 Pearl Jam became enemy number one for Ticketmaster after finding out the company was adding service charges to tickets. The United States Department of Justice was investigating Ticketmaster’s practices at the time and asked the band to create a memorandum of its experiences with the company. The band eventually canceled its 1994 summer tour in protest. After the Justice Department dropped the case, Pearl Jam continued to boycott Ticketmaster, refusing to play venues that had contracts with the company.

Thanks to this current lawsuit, Ticketmaster faces a minimum payment of $11.25 million per year over the four-year life of the settlement. Ticketmaster is also required to pay legal fees for the class action and its penalties are subject to limitations.

Even though they are agreeing to settle Ticketmaster is clearly not accepting blame or responsibility for its actions.

Ticketmaster’s statement: “Ticketmaster vigorously disputes that its previous descriptions of these fees were misleading and the responses of customers to the news of this settlement have confirmed that. Nonetheless, as part of the settlement, Ticketmaster has modified its disclosures to emphasize that there is a profit component in these fees.”

Get over yourself Ticketmaster – even the devil eventually gets his due.