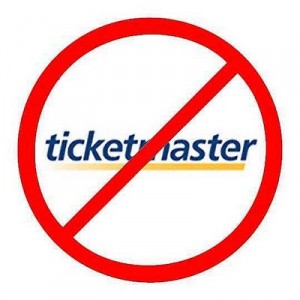 As a person who loves live music I have the displeasure of dealing with Ticketmaster on a frequent basis.  Since its 2011 and most tickets are purchased online I usually have no choice but to use Ticketmaster if I want to see the band or artist of my choice.  Although I am willing to spend more money for good seats when it comes to live music I absolutely detest seeing my ticket listed at one price only to see it skyrocket after “service” and “convenience” fees.  Convenient?  Convenient for who??

If Van Halen wants to charge me $150 to sit close I’ll pay it – what I don’t want to pay is another $20 just for using Ticketmaster.  A friend of mine recently went to buy tickets for popular San Francisco music festival Outside Lands.  He thought he was paying $185 per ticket but once the Ticketmaster monster swallowed him up and spit him out he was paying $210 per ticket.  Needless to say he was not happy.

Now that I’ve complained for two paragraphs let me provide some background on this beast.  Ticketmaster Entertainment, Inc. was a ticket sales and distribution company based in West Hollywood, California with operations in many countries around the world. In 2010 it merged with Live Nation to become Live Nation Entertainment.  Usually Ticketmaster’s clients (promoters) control their events and Ticketmaster acts as an agent, selling the tickets that the clients make available to them.  Apparently, Ticketmaster does not receive any of the advertised ticket prices when a ticket is sold.   Instead, Ticketmaster makes their money from service fees and because buying tickets through them is usually your only option I would call this a monopoly- wouldn’t you?

The worst part is that the consumer doesn’t get any kind of discount for buying more tickets.  In the newspaper business if you advertise for 12 months instead of six you get a better rate.  In the abyss that is Ticketmaster the more money you spend the more you get charged.  How the hell does that make any sense?  It doesn’t.

So what can be done?  Alternative ticketing companies have emerged but due to Ticketmaster’s exclusive agreements with a large percentage of venues none of them have the range of the almighty Ticketmaster.  As a result, people turn to scalpers, brokers and Craigslisters in an effort to do whatever they can to avoid extra fees. Some small venues give you the option to buy tickets at their box office to evade fees but these places are few and far between and their box office hours seem to get shorter and shorter.

I’m hoping that some hot shot attorney figures out a way to sue Ticketmaster into being fair and not overcharging people who just want to see some live music.  In the meantime, try using other sites and try not to jump off a building when you see that your additional fees are equivalent to a third of your initial ticket price.