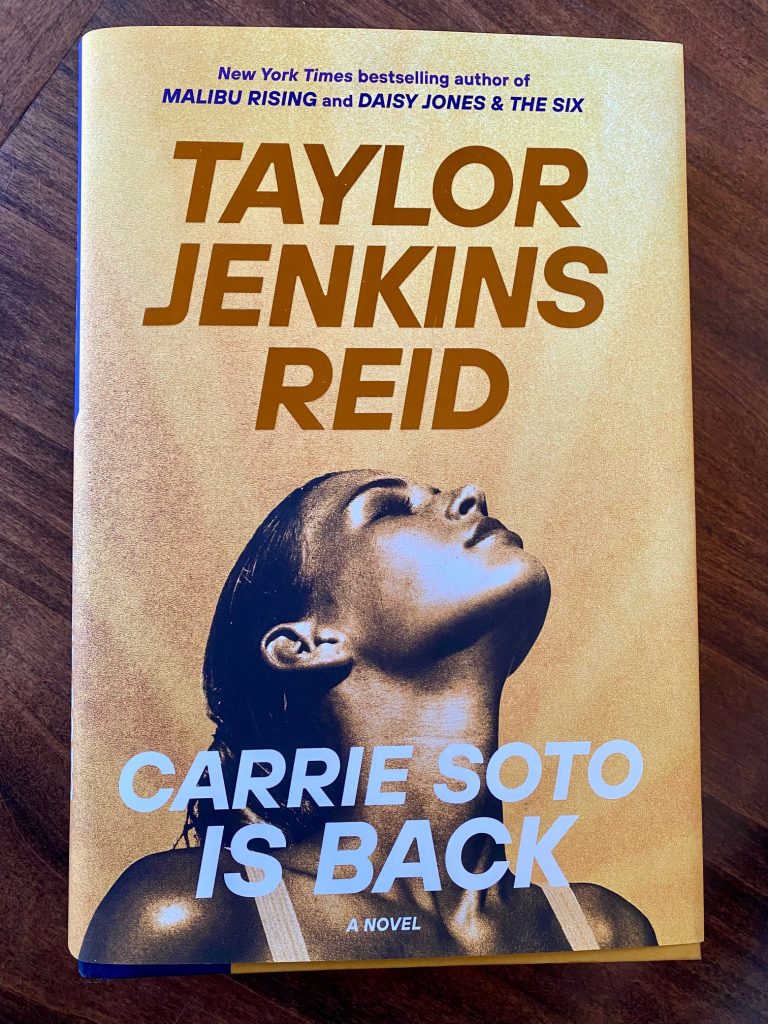 I know I’ve said this before, but wow does Taylor Jenkins Reid know how to start a book. Just like Malibu Rising https://lauralieff.com/malibu-rising/, the first line of Carrie Soto Is Back grabs my attention and I’m all in.

But of course I’m all in – I preordered this book months ago because Reid singlehandedly got me to read fiction again. It all started with Daisy Jones & The Six (the captivating story of a 70s rock band that resembles Fleetwood Mac) https://lauralieff.com/daisy-jones-the-six/, and then Malibu (which is about the famous Riva family and takes place in the 80s), followed by The Seven Husbands of Evelyn Hugo (which wasn’t my favorite) https://lauralieff.com/the-seven-husbands-of-evelyn-hugo/, and now the highly-anticipated Carrie Soto Is Back.

In addition to knowing how to start a book, Reid is a dialogue connoisseur. Writing dialogue is hard but she gets it. I can clearly visualize the characters, their environment, and what they look like. In this book, our protagonist (antagonist?) is Carrie Soto – a retired professional tennis player who comes back to defend her record of most Slams in women’s tennis history. If that name sounds familiar, it should if you’ve read Malibu. Carrie is the tennis player who Nina Riva’s husband Brandon cheats with making all three of them tabloid fodder. Although we first read about Carrie very early on in Malibu (page 12 to be exact), and then a bit throughout the book, I did not expect her to have her own story told. But I should have known better because Reid has an uncanny ability to cross reference characters throughout her books which is quite a feat. For example, Mick Riva shows up in Daisy, is a main character in Malibu, shows up again in Evelyn, and is mentioned in Carrie. Nina is briefly mentioned in Carrie as well, but Mick seems to be everywhere in Reid’s world.

Anyway, back to Carrie. What’s interesting about her as a character is that, unlike Daisy Jones, Nina Riva, and Evelyn Hugo, Reid doesn’t repeatedly talk about her beauty. Instead, Carrie is written to be a polarizing character – you either love or hate her – but you can’t deny her self-awareness and there is a lot to be said about that. We learn that she was raised by her father to be a tennis champion and that’s all she ever knows as a kid: tennis, tennis, and tennis. It’s a very Serena/Venus Williams way to grow up which of course has its positives and negatives.

While reading the background story is interesting, present day (the 90s) is where the narrative soars. Carrie is a balls-to-the-wall hardcore athlete and competitor who is not interested in what people think of her, refuses to placate the media, and does not give a shit about anyone’s feelings. Though there are some moments where I thought to myself, “Really Carrie?” there are more moments where I thought, “Good for you.” For example, while the press wants her to be more gracious when she wins and say something like “the ball fell my way today,” her answers are usually along the lines of “I won because I work harder than anyone else.” I love that she doesn’t apologize for anything and points out the unfairness of it all: “It wasn’t enough to play nearly perfect tennis. I had to do that and also be charming. And that charm had to appear effortless.”

In other (more humble) instances, she finds herself wanting to say something kind but can’t find the words. It’s interesting what she does and does not have trouble verbalizing. She has a hard time finding the words to give praise or apologize, but is easily able to talk about her capabilities as a tennis player. She also has a lot of trouble articulating her feelings – especially when it comes to Bowe – and it’s almost endearing.

Another aspect of Reid’s writing that I admire is her attention to detail. The clever names of Carrie’s competitors, the magazines, and tournaments demonstrate that either Reid has spent some time around tennis or she did her research – probably both. I wonder if she read Andre Agassi’s Open before writing this book. Additionally, she does an excellent job of using the sportscasters and the media outlets to move the narrative along. In fact, those media releases and articles are some of my favorite pages. That technique worked extremely well in Evelyn Hugo and it’s even more successful in this book. Also, the pop culture references are skillfully woven into the story and serve as a reminder that the action is taking place in 1994: OJ Simpson is on trial, Cameron Diaz is a breakout star, Aaliyah is still alive, and the movie Before Sunrise is about to hit theaters.

While I can’t relate to the father/daughter bond, it’s amazing to read about a relationship that survives ups and downs throughout several decades. Carrie becomes the person Javier taught her to be but there are some aspects of her personality that suffer because of her blind ambition to become the best tennis player in the world. In fact, later in life she has to unlearn a few things to become a better, more open human being.

The back-and-forth Spanglish works – but I’m wondering if that’s because I know some Spanish. I’m not sure how a reader who doesn’t know one word of the language will feel, but for me it’s an effective technique as it paints an even more vivid picture of Carrie and Javier.

Carrie behaves the way she was taught to behave – all business: ‘“I think I have done you a disservice,’ my father finally said, looking me in the eye. ‘I told you from such a young age that you could be the very best. But I never explained to you that it’s about aiming for excellence, not about stats.’”

Watching the main character evolve, but still be herself, is a testament to Reid’s ability to realistically write a compelling character arc. In a moment of reflection she says, “I wonder for a moment why I have spent all my time worried about losing things, when there is so much here.”

Even though Carrie is close to my age during the bulk of the book, I can’t help but empathize with Javier. A big part of parenting is being ok with mistakes and understanding how to fix them.

In the Acknowledgements, Reid says, “Thank you for showing up for these characters.” If I could speak to Reid directly I would say, as a professional writer, avid reader, and mother of an incredible son, “Thank you for writing characters (and storylines) so captivating that they bring me to tears.”

In the same section she also notes, “It is an incredible skill, to understand when you are right and when you are wrong.” No truer words. She also thanks her husband for helping her become more herself that she has ever been before. I thank mine for the same. ❤️

Javier explains the tennis scoring system to Carrie as a child. The foreshadowing is clear:

“And love? What does that mean?”

“Right, you have no points. Love means nothing.”

“Something I learned early is that most assholes don’t have comebacks.”

“Do not let what anyone says about you determine how you feel about yourself.”

“I wondered why anyone would want to build anything out of sand, when tomorrow it will be gone, and you’d have nothing to show for your day.”

“I looked up at him, my guarded heart opening ever so slightly.”

“Everyone will be looking at you, looking to see if you’re as good as they’ve heard. Just be good – don’t try to prove it.”

Power of the press: “Under a headline dubbing the match ‘The Coldest War,’ one of the journalists called me ‘the Battle Axe.’ Within days, it had become my name.”

Carrie on her dad: “We tried to find a new way of speaking…Like me, he has no interest in excavating what is long buried.”

On recovering from Brandon: “It took a while for me to dust myself off.”

“Winning, I’ve found, does sway a lot of people.”

“There is an edge to my voice that startles us both.”

“When I decided to play professional tennis, I apparently signed a contract to let people talk shit about me for the rest of my life.”

Bowe on Carrie: “Every sentence that comes out of your mouth is like a razor blade.”

“Some men’s childhoods are permitted to last forever, but women are so often reminded that there is work to be done.”

On being back at the Australian Open: “I am both stunned to find myself here again and positively sure I’ve never left.”

“My older self knows that you must stop – in the middle of the chaos – to take in the world around you.”

“Her incisors are long and sharp, and when she smiles, she looks like she is about to bite.”

“When did winning become something I needed in order to survive? Something I did not enjoy having, so much as panic without?”

Carrie on Bowe: “You knew you were watching a man throw his heart onto the court, a human being with flaws that threatened to do him in.”

Javier to Carrie: “My heart hurts when you hurt because you are my heart.”

“Everything we achieve is ephemeral.”

“I take the moment and pin it to my heart, as if it will wait for me to come back to it later.”

“You need to know it instead of proving it.”

“It stuns me silent, for a moment: just how vast the gap is between who I am and how people see me.”

SportsRadio Nation on Bowe: “I don’t know how this ends, but I’ll tell you it’s a hell of a show.”

Carrie on Javier: “He would have cheered the loudest.”