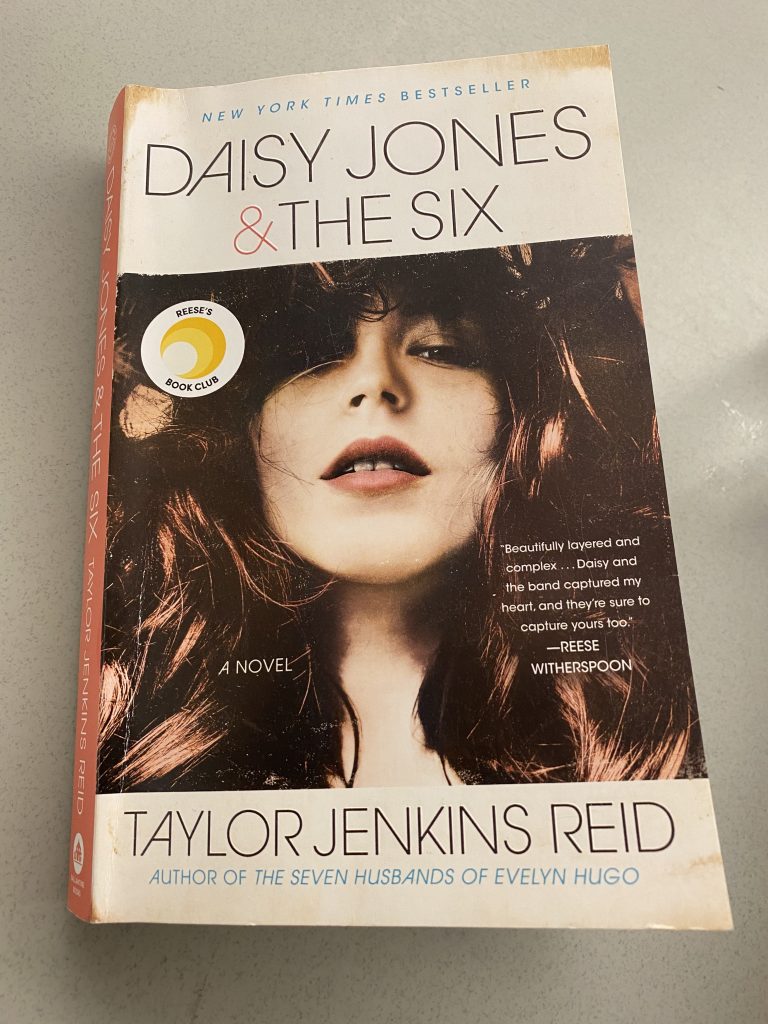 When my friend Nina, who is an avid reader, told me I would love this book about a fictional 1970s rock band I have to admit that I didn’t immediately buy it. She’s known me for a long time, and said that it was right up my alley, but I haven’t been into reading novels for a while. Instead, I’ve been mainly reading autobiographies, biographies, and memoirs so I wasn’t totally convinced I wanted to spend time reading fiction. When I looked up Daisy Jones & The Six, and found out that it might be loosely based on Fleetwood Mac during the making of Rumours, I became more intrigued. My local bookstore didn’t have it so I ordered it via Amazon. It arrived just before we left town for a wedding in New Orleans but I was already reading the Rob Lowe book so I left it on my desk for when we returned. As we walked through three different airports I realized that the book was EVERYWHERE. Literally everywhere I looked there was Daisy Jones & The Six. I thought, wow there must be something about this book. Turns out, Nina was right.

Written/narrated as an oral history, the novel has everything a rock and roll fan (who is also a writer) is looking for – captivating storytelling, characters you can picture, the fact that people can experience the same scenario and have different interpretations/memories of what actually happened, and people who truly love music. The more I read, the more I realized that I wanted to see this band live or at least hear their songs! I was invested from the last line of the Author’s Note: “The truth often lies, unclaimed, in the middle.” I couldn’t wait to see what happened next and that feeling continued for the entirety of the book.

I’ve always felt that if, as a reader or viewer, you can root for intrinsically flawed people, then those characters have been written extraordinarily well. That is absolutely the case here – especially with Daisy Jones and Billy Dunne. These two people are complicated, talented, destructive, and in love (whether they want to admit it or not) which of course makes them easy to hate but also easy to cheer on. It’s an odd juxtaposition but that’s one of many reasons why there is no question that author Taylor Jenkins Reid has created something special. And writing in this way – creating voices for so many characters and sticking to them – is no easy feat. Reid writing the novel in a rock documentary/Behind the Music style is brilliant and brave. I don’t think I’ve ever read a book that pulled off something like that so successfully.

As I read, I found myself wondering who the narrator/interviewer was and then, a little bit more than halfway through the book, a character addresses the narrator/interviewer. “I know I told you I’d tell you everything but how much ‘everything’ do you really want to know?” At that point I realized that the narrator/interviewer wasn’t someone working for a magazine or newspaper. It was someone more important to that. But who? And then, close to the end of the novel, we find out exactly who that person is because the person interjects in the narrative for the first and only time. I’m not going to give anything away but I will say that I wasn’t expecting any kind of “big reveal” from the book – and then all of the sudden it snuck up on me. And it’s a good one.

These characters – and the story being told about them – are written so well that it almost breaks my heart that they aren’t real. I recently learned that Reese Witherspoon, who put Daisy Jones & The Six on her book club list in the first place, is going to make it into a musical limited series that features original songs on Amazon Music! Yes!

There are so many memorable lines in this book but here are my top thirteen (because I couldn’t get whittle the list down to ten):

“Didn’t seem like she was trying to be anything. Except herself.”

“You’d have thought she had rocks in her throat that the sound had to travel over.”

“It did have that kind of feeling where…you know you’re in a time of your life you’ll remember forever.”

“The album didn’t have to be exactly my way for it to still be mine.”

“You’re going to need to work really hard at getting over yourself.”

“Music can dig…It can take a shovel to your chest and just start digging until it hits something.”

“Just by touching you, he’d scrape you.”

“Democracy sounds like a great idea, but bands aren’t countries.”

“I think I’ve rolled my eyes about five thousand more times in my life just on account of Billy Dune.”

“[Daisy’s] got an alias because of course she does.”

“Art doesn’t owe anything to anyone. Songs are about how it felt, not the facts.”

“Things don’t have to be perfect to be strong.”

“The two of you think you’re lost souls, but you’re what everybody is looking for.”

Everything about this book is authentic including the names of the songs, the way each character is portrayed, and how the details of songwriting, taking chances, and making life-changing decisions matter. While some of the themes are expected – addiction, love, stubbornness, passion, etc. – this story is one that readers will always remember.