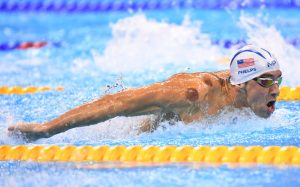 As someone who has been in the media business for a long time, I continue to be fascinated by what catches people’s attention. During the summer of 2014, everyone and their mother was participating in the Ice Bucket Challenge which was an activity that involved dumping a bucket of ice and water one’s head in an effort to raise awareness about and encourage donations for amyotrophic lateral sclerosis (ALS also known as Lou Gehrig’s Disease). Between July and August of that year, social media was inundated with videos of people Ice Bucket Challenging themselves, friends, family, and coworkers in new and creative ways. Because I found it extremely interesting that such a simple concept became viral, I wrote about it  https://lauralieff.com/the-brilliance-of-the-ice-bucket-challenge/ and pointed out the genius of the idea. As a result of the ice bucket frenzy, as of August 18, 2014, contributions had reached $4 million because people were having a blast doing something “ridiculous” and watching each other’s funny and inspired videos.

Now, two years later, “cupping” has become this summer’s Ice Bucket Challenge. Why? Because Olympic athletes started talking about it and then the media quickly caught on. Cupping is so trendy, in fact, that I feel like it is getting more coverage than the world-famous Olympic athletes who are competing!

If you haven’t had a chance to tune in to the 2016 games, cupping is an ancient therapy that, until recently, has mostly been used in Middle Eastern and Asian countries, especially China. The therapy entails having warmed, round glass suction cups placed on sore parts of the body to release tension in those aching muscles. By creating a partial vacuum, the glass cups are believed to stimulate tender muscles and blood flow, while relieving pain. Because the therapy includes this suction technique, it leaves behind dark red circular spots that look really gnarly – like someone left behind huge hickeys or spherical burns. Throughout the games, these spots have been um – spotted – on the backs, legs, and shoulders of big names like gold medal swimmer Michael Phelps, American gymnast Alex Naddour, and Belarus swimmer Pavel Sankovich, among others. 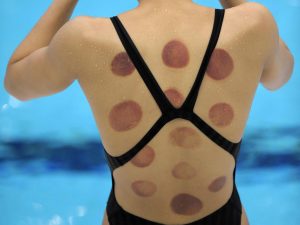 For some reason, all three athletes have posted pictures of their speckled limbs and backs on social media which has clearly contributed to the hype. Maybe they decided to share these photos to avoid answering the same questions over and over about the spots on their backs, or maybe the therapy has helped them so much they wanted to share. Regardless of the reasoning, all of the reporters covering the games seem obsessed with talking about cupping – so much so that the amount of airtime spent on discussing the therapy might actually rival the coverage on the  seemingly unstoppable U.S. women’s gymnastics team!

So what’s the big deal? Aren’t they just red circles? Who cares? Well first of all these high-profile athletes made the world care when they started posting photos on Facebook and Instagram. Even Phelps shows footage of his cupping therapy in his commercial for Under Armor titled “Rule Yourself.” Also, while the Olympics usually garners high ratings and an overall large interest from viewers, so far this year the ratings aren’t as elevated as the London games four years ago. Furthermore, reporters are always looking for innovative ways to talk about the athletes, the events, the city, and the overall scene that is the Olympics, and cupping is definitely something new.

Technically there are 16 total days of competition from the opening ceremony (August 5) to the closing ceremony (August 21) and already, just a few days in, the photos of the large red circles are everywhere. It will be interesting to see if cupping continues to garner publicity or if everyone gets tired of talking about it and/or hearing about it. Either way it’s undeniable that the therapy is providing a unique way to get people talking about the Olympics and what athletes go through to compete in what is considered the most important sports competition in the world.