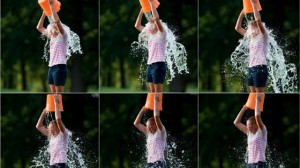 Unless you’ve been hiding under a rock for the last few weeks (or don’t use Facebook) you know what the ALS Ice Bucket Challenge entails: dumping a bucket of ice and water over your head to raise awareness for the ALS Association. You also get to nominate people to do the same. Once nominated, the participant must perform this random act of nonsense within 24 hours or donate $100 to the ALS charity of their choice.

Since these ice bucket shenanigans began on July 29, social media has been inundated with videos and posts and honestly it’s been entertaining to watch. Here are a few facts that demonstrate the incredible power of social media:

-During the last week alone, over 176,000 people have tweeted about the challenge.
-Since this campaign began, more than 70,000 new donors have given money to the ALS Association’s 38 chapters.
-Contributions have totaled $4 million so far.

Why is this awareness campaign a genius idea? I’ll tell you:

-This exercise is interactive and you can nominate others to join in the fun!
-These days everyone loves the word “challenge” – it’s become a buzz word. The abs challenge, the USA Pro Challenge, the dog-walking challenge, the Pepsi challenge, etc.
-It involves people dumping ice and water on themselves – a move that is traditionally reserved for coaches after a big win – and seeing the looks on people’s faces and hearing the sounds that come out of their mouths after the coldness hits them is hysterical.
-People are having fun.
-The videos are funny and everyone gets a kick out of watching friends, neighbors, family and even celebrities get creative and dowse themselves with cold substances!

Speaking of celebrities, the most recent famous human to “participate” is Charlie Sheen who unsurprisingly decides to dump a bucket of money over his head instead of ice and water and nominates Jon Cryer, Ashton Kutcher and sworn enemy Chuck Lorre to meet his challenge. Of course he did the challenge this way – he’s Charlie F-ing Sheen. At least he’s planning on donating the $10,000 he dumped over his head!

Unfortunately there are a few issues that have been brought up about the ice bucket challenge, namely the issue of wasting water. Although that’s technically true and we shouldn’t waste water, issues could be made about everything people do to raise money for a cause. For example when people participate in walks and runs to raise money for various charities or causes, streets are closed down and thousands of participants are present which one could argue leads to more trash and congestion in the respective cities these events are taking place. Does that mean we shouldn’t have these races? The list could go on and on and there will always be people who find the negatives in something positive. So keep going Ice Bucket people! The creativity and laughs resulting from these videos are doing more than raising money – it’s getting people to pay attention in a positive way.