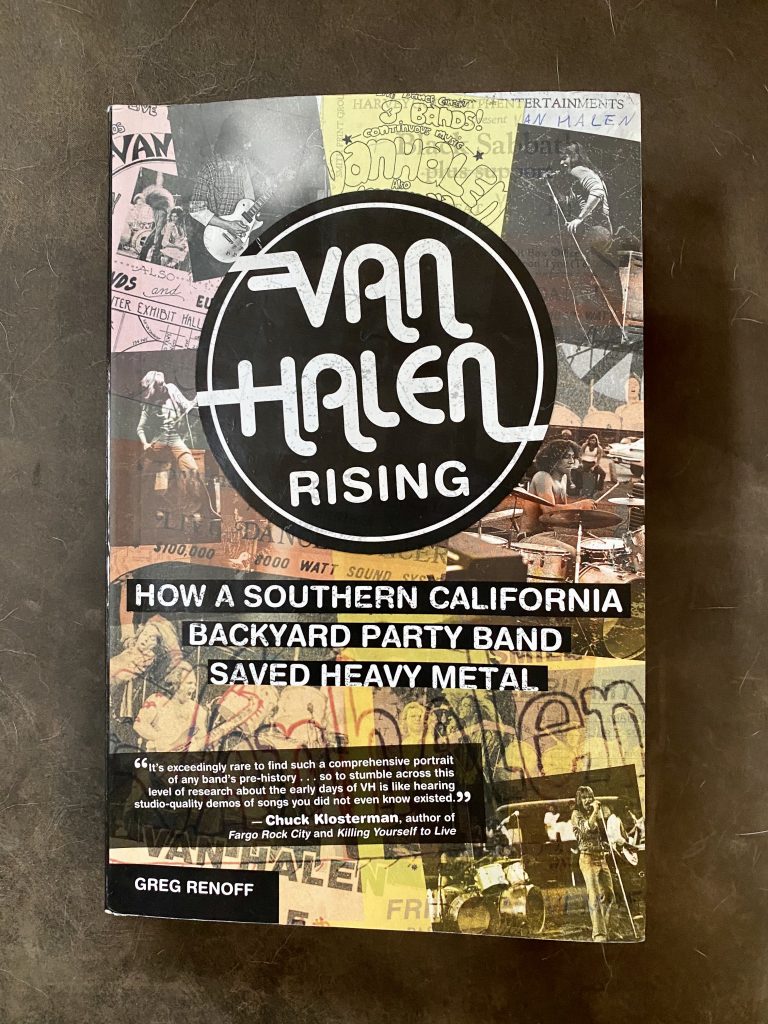 “In light of heavy metal’s perennial popularity, it’s easy to forget that the abrasive musical form was on the ropes in 1978.” That’s a hell of way to start a book that has a subhead that reads: How A Southern California Backyard Party Band Saved Heavy Metal. But it’s also a necessary statement because most people associate Van Halen with 80s glam metal when in fact the band’s first album was released in 1978 during a time when soft rock groups of Laurel Canyon were selling millions of records: https://lauralieff.com/the-allure-of-laurel-canyon/

According to the extremely well-researched Van Halen Rising: How A Southern California Backyard Part Band Saved Heavy Metal, Van Halen “kept heavy metal from slipping beneath the waves by selling millions of albums worldwide and stealing the show everywhere they played.” It’s no secret that Eddie and Alex Van Halen are classically trained musicians who constantly practiced to master the guitar and drums, respectfully. But not everyone knows that in the beginning they focused on playing covers exactly how the originals were played. Down to every last long note. David Lee Roth was the one who said they needed to play rock songs people could dance to – which set the band apart from and elevated them above the rest. And that was before the Van Halen brothers hired him.

“When the brothers [said] that they’d had little luck with nightclub bookings, Roth asserted that people went to nightspots to get down, not relive Woodstock. ‘It’s because you play all 20 minutes of “I’m So Glad” by Cream, complete with drum solo, live, note for note and it’s very impressive, but you can’t dance to it.’”

Turns out, he was right. I’ve seen Van Halen live twice and, although in 2008 and 2012 Roth wasn’t doing air kicks off speakers and hitting his high-note yelps like he did in the 70s and 80s, he was and still is one of the best frontmen I have ever seen live. This combination of his insane stage presence, high-note screams, long hair, and unapologetic outfits paired with Eddie’s undeniable musicianship brought a new angle to metal. And people were ready for it.

“They started by retaining metal’s essential elements: the swagger and screams, the monster power chords and over-the-top guitar acrobatics, and the jackhammer rhythms…But they removed the meandering song structures and doomy sound…and added hooks so big they could land a whale and choruses so sweet they could rot teeth.” In short, “Van Halen saved heavy metal from the scrap heap.”

Clever descriptions like that are what make Greg Renoff’s book worth reading. Also, the fact that Van Halen Rising might be the most comprehensive rock and roll book in history makes it very enticing. Renoff’s Works Cited goes on for five pages and each work is in tiny font. That being said, the book is also too repetitive. I don’t know how many times I read iterations of the following points:

Throughout the book, there’s a lot of discussion about how Roth’s vocals were subpar but his showmanship made up for it. I think his vocal range is one of the aspects that set him apart. His boogie-woogie influences (see “Ice Cream Man”) paired with his obvious love for loud rock (see “Panama) made him different and exciting.

“David Lee Roth’s singing, complete with his screams, yelps, and whoops, wouldn’t win him a Grammy for best vocal performance, but those affectations made him instantly recognizable.”

And that’s what mattered. In the book, Roth is quoted saying that Van Halen was the first to pioneer the short song in heavy rock and there is something to be said about that. For example, I love Led Zeppelin and Black Sabbath but sometimes those seven-minute songs are too long to play on my radio show so I end up playing something else.

“They were the city’s most disruptive and talented rock band.”

“Starting in 1978, Van Halen took the swagger they’d learned playing dive bars and hosting wet t-shirt contests in Los Angeles and unleashed it on an unsuspecting American public. Rock and roll – and America – would never be the same.”

When people heard Eddie play “Eruption” for the first time they didn’t know what to make of it. “What the hell is he doing to get that sound? Is it a machine?”

‘“Ice Cream Man’…presented Roth with a golden opportunity to leer like Jim Dandy and lemon-squeeze like Robert Plant.”

“Roth sang with brio and sass, power and energy, personality and charm. He was having a great time fronting Van Halen, and it sounded like it on tape.”

There are two parts to Renoff’s final analysis of Van Halen:  1) “Van Halen – arguably the greatest debut in rock history – laid a foundation for success that would make David Lee Roth and Edward Van Halen household names and make their band of the biggest in rock history.” 2) “It’s self-evident that the four original members gave rise to a band that by 1978 was capable of producing greatness both onstage and on vinyl.”

Both are accurate statements as Roth and Eddie were innovators – no doubt about it – but they needed each other to be great. While the former was the ultimate hype man, the latter changed the guitar playing game forever. (Also, one could argue that Guns N Roses’ Appetite For Destruction is the greatest debut in rock history. But I digress).

All that being said, I didn’t read this book to be convinced that Van Halen is one of the best rock and roll bands in history – my son’s middle name is Halen for crying out loud – but I was looking for the story of who Roth, the Van Halen brothers, and Michael Anthony were before they became Van Halen. Renoff accomplished that but he was a little long-winded. Those bullet points were driven home too many times making the book feel like an enormous (albeit awesome) research paper that required the student to give multiple pieces of support for every point. As I said earlier, this book is probably the most thoroughly researched rock and roll book ever, but many pages of repetition could have been cut. Either way, I learned a lot more about the Van Halen foursome and I’m glad to know that, 80 million albums later, talent and an unparalleled work ethic were equally rewarded.