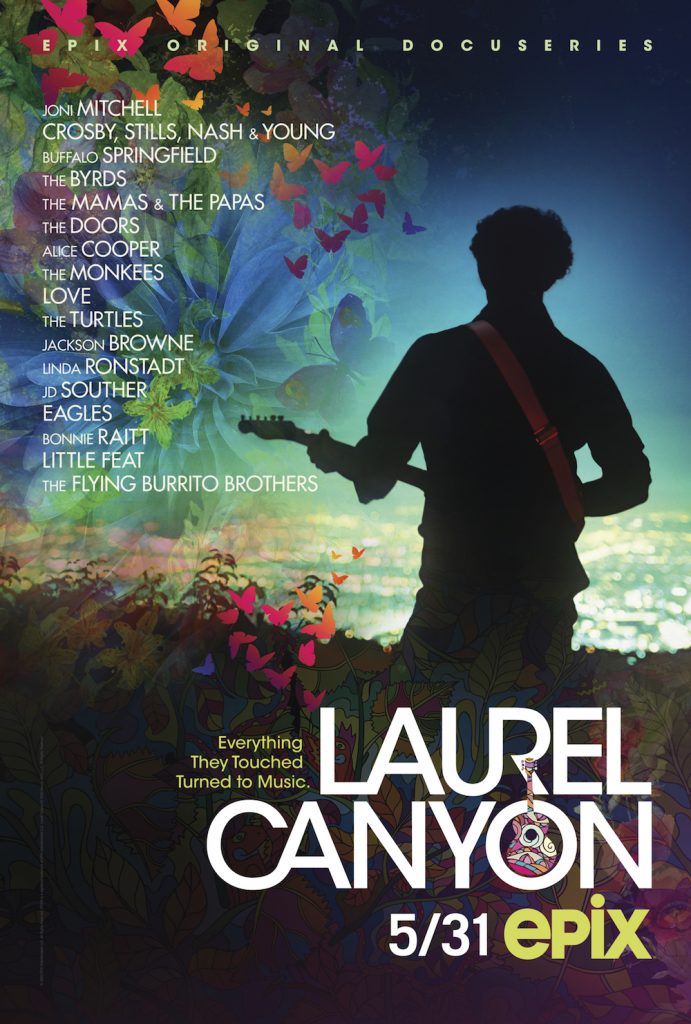 While folk music is not my favorite genre, there are plenty of Neil Young, Joni Mitchell, Buffalo Springfield, Doors, Mamas and the Papas, and Eagles songs I love, so I decided to watch the two-part documentary Laurel Canyon based on my mom’s recommendation. My issue with some of the music coming out of Laurel Canyon in the 1960s is that a lot of it leans more to the hippie side than the songwriting side and I prefer the latter. That being said, no one can deny the imprint left on rock and roll history by artists like Crosby, Stills, Nash and Young, The Byrds, Bonnie Raitt, Jackson Browne, Lind Ronstadt, and Alice Cooper – who I had no idea came out of Laurel Canyon!

Beautifully shot and well-researched, Laurel Canyon explores the idyllic wooded area in the Hollywood Hills that spawned music that would later be classified as classic rock from artists before they were famous. Hinging on vintage footage and photographs (so many of which are of musicians talking on landline phones which I find hysterical) taken by those who captured what went on in Laurel Canyon, the documentary delivers what the viewer expects – a historical account of a beautiful place that offered affordable living and a sense of community. While the radio personalities, former managers, and record producers who put in their two cents throughout the two episodes are mostly interviewed in person, a large percentage of the artists who made the area so revolutionary contribute via voiceover. Obviously, that makes sense for those who are diseased but I found the format odd for those who are still alive.

Throughout the docuseries, the artists make it clear that Laurel Canyon transpired organically meaning that these musicians just happened to all live near each other. They would stop at one another’s houses, hang out, and play music. What a life. I also find it interesting that people like Ronstadt, Cooper, and Glenn Frey spent time on the Sunset Strip way before the metal bands I love cut their teeth at places like the Troubadour and the Whisky A Go Go. It was an entirely different era and therefore an entirely different scene.

Laurel Canyon is described as a place where gigging musicians who were hanging out on the Strip lived together and played. No one was famous yet. Frey and Don Henley met at the Troubadour when they were playing for different bands. The former was playing backup for Ronstadt and the latter for Shiloh which soon changed when Ronstadt hired both of them as her backup band. I already knew that she is credited for making the Eagles happen but I didn’t know that Browne wrote “Take It Easy” for them. I also had no idea that Ronstadt was instrumental in the success of the Eagles’ second album Desperado. In fact, she rescued the song “Desperado,” along with the entire album, from falling through the cracks when she recorded a version of the song herself. Clearly the Eagles got more than a little help from their friends as they became one of the biggest rock acts of the 1970s and eventually one of the world’s best-selling bands.

Although my favorite Eagles song is “Seven Bridges Road,” which is all about the harmonies, some of the constant harmonizing these bands strived for gets old because the songs sound the same – which is one of my main issues with “current hippie bands” like Widespread Panic, Phish, and Leftover Salmon. The Mamas and the Papas, the Byrds, and the Eagles are now considered “easy listening” and that’s not usually what I want to listen to or play on my radio show. In fact, my favorite artists to come out of Laurel Canyon are the ladies – Ronstadt, Mitchell, and Raitt. Ronstadt’s voice is incredible, Mitchell is a storyteller, and Raitt is the ultimate female blues rocker.

While there is no question that the community aspect of Laurel Canyon was authentic and exciting, things changed when the horrendous Manson murders took place. According to Graham Nash, everyone was “in this beautiful bubble and those murders put a pin in the bubble and it exploded.” As a result of the murders, the hippies were deemed dangerous and people stopped thinking of the neighborhood as a safe commune where picking up hitchhikers was no big deal. Although horrifying, the juxtaposition of the freewheeling music and the gruesome massacre is part of the area’s history and it would have been irresponsible not to mention it. Another aspect that burst the Laurel Canyon bubble was the death of Cass Elliot (heart attack) and Jim Morrison (heart failure). Henley on Morrison: “Success can be just as scary as failure and some people don’t live through it.”

Though the docuseries definitely paints a serene picture of Laurel Canyon, I appreciate that the other side of the hippie lifestyle is revealed as well. There are several conversations about the role drugs played – both positive and negative. For example, Mitchell talks about taking acid and realizing that “maybe truth doesn’t rhyme.” Robby Krieger mentions how alcohol negatively transformed Morrison from a poet into an unpredictable chaotic mess who was sometimes so hammered he could barely stand, nevermind sing.

As time went on, and the Laurel Canyon hippies became serious musicians with record contracts, Elliot said it best: “We were hippies but we were rich hippies.” The documentary mentions that as people became more successful, the camaraderie changed as well. I bet it did – people were less willing to give away songs and lyrics because now they had albums to write and release. Radio personality Jim Ladd says Laurel Canyon in the 70s was “a time when music and art was everything. You lived for it.” So many decades later, the area still maintains its allure and is featured in movies and television shows like This Is Us, Californication, and Once Upon A Time In Hollywood. My family has been out of the music retail business for 22 years (this month), but my mom can still remember who was on what label, where she saw them play live, and how their albums performed. That kind of history matters just as much as Laurel Canyon’s.