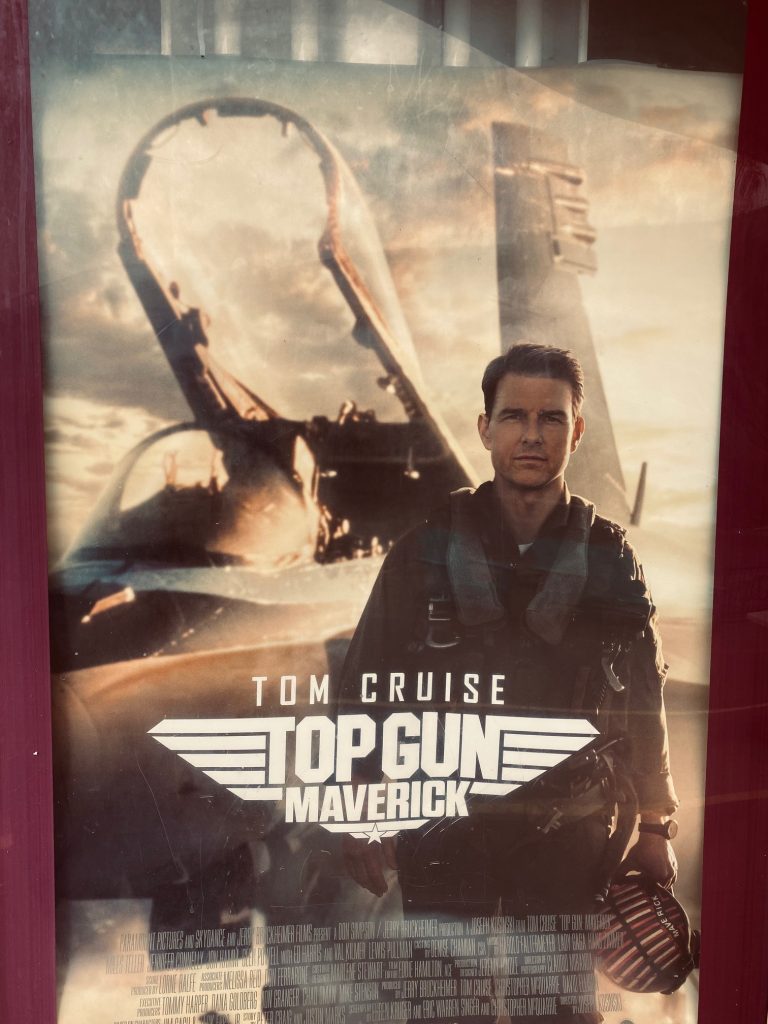 You’re either a Top Gun fan or you’re not. You either love Tom Cruise or you don’t. Either way is fine, of course, but if you occupy the former camp you need to go see Top Gun Maverick. Yesterday.

Equal parts nostalgia, action, and drama (with a little bit of much-appreciated comedy), this movie is everything original Top Gun fans want to see and more. I cried, laughed, and found myself in awe of the acting, the fighter jets, and how attached I still am to the original characters and storyline. As a viewer, and a longtime fan, Top Gun Maverick was exactly what I was looking for in, what became, a much-anticipated sequel.

As far as the plot goes, there is a mission to be completed and Cruise is the guy to get the crew through it. In the original 1986 movie, Pete “Maverick” Mitchell’s wingman Goose was killed in a mission gone wrong and viewers of that film were left with the clear notion that Goose’s death, although officially deemed an accident by the US Navy, was Maverick’s fault and would haunt him the rest of his life. Top Gun Maverick brings that haunting notion into clear focus. While the almost 60-year-old Maverick has aged well, and has definitely learned a few things, he is a tortured soul. The good news is that he now prioritizes pilots returning home over winning – especially regarding Goose’s son Rooster. That being said, he still wants to show why he’s the best at what he does regardless of how much time has passed.

Again, although Cruise is not for everyone, he is, without question, the definition of a movie star. I’ve always been a fan – especially Top Gun, Jerry Maguire, Cocktail, Days of Thunder, Risky Business, A Few Good Men, and Rock of Ages – but this movie is next level. Every actor does a great job,  especially Rooster’s fellow pilots including Payback, Phoenix, and Bob, along with Jennifer Connelly as Maverick’s (sort of) long lost love, John Hamm in the Tom Skerritt role, and Bashir Salahuddin as Maverick’s right-hand man and mentor to the Top Gun lieutenants. But, of course, it comes down to Cruise, Val Kilmer, and Miles Teller’s Rooster. They make this movie happen on so many levels.

And then there is Goose. Clearly the amount of guilt Maverick carries regarding Goose’s death and his son following in his footsteps is more than a major theme – it is palpable throughout the entire movie. You feel it in your bones as you watch. And this guilt is both incredibly sad and incredibly effective as the film seamlessly balances the nostalgia with the present and is very careful about spending just the right amount of time looking back. After all – time moves on.

Speaking of looking back: Part of what was so exciting (intoxicating?) about the original movie was the superstar cast and the sheer cockiness of every pilot. They had the need for speed, they were brave, and they were the best of the best. In short, they were the top young guns in the Navy and they knew it. But while Cruise clearly continues to age gracefully, and still looks good wearing Aviators while riding a motorcycle, Kilmer has, sadly, not fared as well. In September 2021 I wrote a review about his book and subsequent documentary – https://lauralieff.com/val-kilmer-is-definitely-your-huckleberry/ – both of which discuss his career and devastating health trauma. Reading about it and watching it in the documentary was rough, but seeing Kilmer in this movie as Iceman – whose debilitating illness is respectfully worked into the script – is equal parts essential and heartbreaking.

Even though the original Top Gun is clearly an action movie, there are several scenes that revolve around singing in bars – i.e. “You’ve Lost That Loving Feeling” and “Great Balls of Fire” – which of course is fun. In one of my favorite scenes, Top Gun Maverick features a throwback of the latter that almost instantaneously made the tears well up and pour all over my face – especially the flashback footage of Goose’s son who was around Fleet’s age in 1986. I had totally forgotten how young his son was when he passed away. Obviously seeing the first Top Gun as a kid versus seeing Top Gun Maverick as a parent hits different emotional marks for me but the facts remain: 1) Tom Cruise still knows how to star in a movie. 2) This story will always hit home for anyone over 35 years old. 3) The past can be hard to evade. 4) Once again, time moves on.

After the movie, we ran into friends at the theater who were talking about whether or not seeing the original film is necessary before watching this one. My answer is “no question” because there is so much a viewer would miss if they didn’t know the history with Goose, Iceman, and even volleyball versus football. The relationships, the songs, the dialogue – my heart broke in real time every time Maverick said “Talk to me Goose”– are all components that contribute to making the Top Gun franchise a classic.

While everyone knows that the release of this movie was derailed two years as a result of Covid, 34 versus 36 years has probably made it even more exciting for everyone except those involved in show business and the movie theater business. And with all the home streaming options available, there is something to be said about taking the time and spending the money to see a film on the big screen. Additionally, in some cases, sequels turn out to be completely unnecessary while in other situations they allow actors, directors, and fans to delve deeper into an important story. In the case of Top Gun Maverick, three decades was worth the wait.