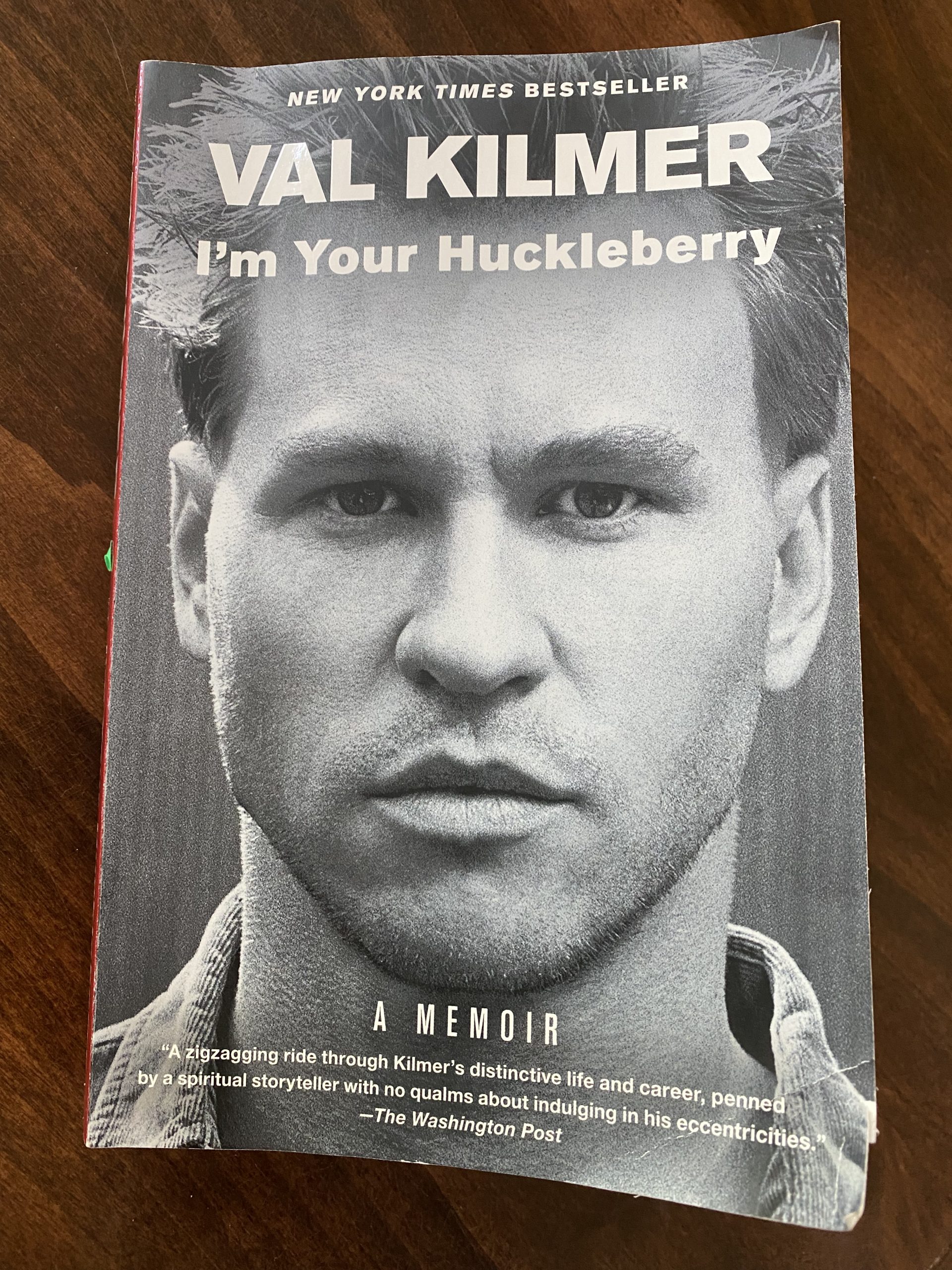 When I picked up Val Kilmer’s book, I’m Your Huckleberry, I had no idea a documentary had been released about him in July. Kilmer briefly mentions the film and describes it as a “side trip.” Then adds: “side trips have been as important to my life as the main voyages.” I’ll watch the film eventually but, as always, I prefer to read the book first.

I’ve been a Val Kilmer fan since Top Gun but I really loved him as Doc Holiday in Tombstone. How the hell did he not win a major award for that performance? No Oscar or Golden Globe nominations – just two MTV Movie Award nominations. But back to the book. I’m Your Huckleberry features many short chapters, which I like because they function as vignettes about his movies, his women, the people who impacted him throughout the years (famous and non-famous), and his family.

Throughout the vignettes we learn all kinds of family history and interesting facts including: 1) Growing up his family lived next door to Roy Rogers and “too close for comfort to Charles Manson.” 2) An early tragedy was horrifyingly pivotal to the family dynamic as no one was ever the same. 3) After getting his first laugh while acting in a musical at age fourteen, he says, “That was the moment I experienced the enormous satisfaction of making hundreds of people laugh…That transformation forged my future. Deep down, I knew I’d never be able to hack a regular job.” 4) Kilmer dropped out of high school at sixteen and became the youngest student ever accepted into Juilliard’s drama school. 5) He gave up a part in 1983’s The Outsiders so he could continue appearing on Broadway. 6) Unfortunately, similar to Andrew McCarthy’s father, Kilmer’s father took financial advantage of him and their relationship (which was already fractured) never recovered.

As far as the actual writing goes, Kilmer provides an abundance of descriptive detail – sometimes to a fault – but he is definitely a storyteller. Although he doesn’t spend too much time on any particular subject, it works. One subject he does enjoy talking about is relationships. All the women in his life, including Cher, Joanne Whalley (the mother of his two children), Carly Simon, Angelina Jolie, Cindy Crawford, and Daryl Hannah, made a lasting impression. It’s clear that Kilmer loves love – as he capitalizes the word throughout the book – but somehow always screws it up. He also loves his kids. Adores them.

It’s clear that writing this book was cathartic for Kilmer, as it seems he decided to write it after his horrifying bout with throat cancer left him without a voice. His harrowing description of the event leads to explaining that writing is now his easiest form of communication. “I write for relief. I write for healing. I write to view the past more clearly and place myself in the center of Love.” Kilmer refers to his autobiography as “long-form blues” because, he explains, “you sing the blues to lose the blues.” He also directly addresses the reader when he says: “I told you when we started that this is a blues tone poem so get ready for some serious heartache.”

I’m a fan of the blues and, overall, a fan of the book. That being said, the parts that get a bit redundant are his descriptions of his ranch in Santa Fe, his love of the cowboy lifestyle, and his yearn to create an artistic commune for all the renegades of the west to hang out and make art. “These hills were home to hundreds of Westerns. Landscapes of imaginary freedom where make-believe cowboys fought fake battles and won real fame and glory.”

Don’t get me wrong, it’s a lovely idea and Westerns are one of my favorite movie genres, but when Kilmer goes off on these tangents he starts to veer too far into hippie land. On another note, I am glad that he refrains from spending much time talking about Christian Science – that might have made me put the book down and never pick it back up. Thankfully, he sticks more to talking about family, friends, and movies. And then he’ll drop gems like this: “Never forget this happened exactly the way this is happening because in time you won’t believe it.” I wish I had written that line.

Here are few more of my favorites:

“All we have as artists is our instincts, to begin with.”

“For the rest of my life, I would be fascinated by that process of leaving myself to find a character who inevitably contained elements of myself. I was losing myself and finding myself at the same time.”

“Cher was a teacher. She taught me that unabashed ambition was not to be judged.”

“I was flabbergasted. And that’s a word you don’t get to say that often and mean it.” So true!

“Good acting requires both detachment and engagement – and, most of all, non-judgement.”

“There are lots of reasons to make art, but I usually migrate toward the educational aspect of it. I like to learn from art.”

“I am still trying to be the best dad I can be.”

“We love Westerns. We learn everything from Westerns and yet learn nothing from them.” I also wish I wrote that line.

On Marlon Brando: “His tongue is more lethal than his pistol.”

On Robin Williams: “His brilliance blinded the room.”

On his mother: “I needed her always. I need her still. Today I wear her turquoise necklaces to keep her close to my heart.”

He describes Top Gun as “both a blast and an education.”

I totally forgot Kilmer was in True Romance! As Elvis!

I need to watch Heat.

He used the word “quixotic” several times throughout the book.

Apparently, Daryl Hannah was the first woman for whom Burton made a snowboard.