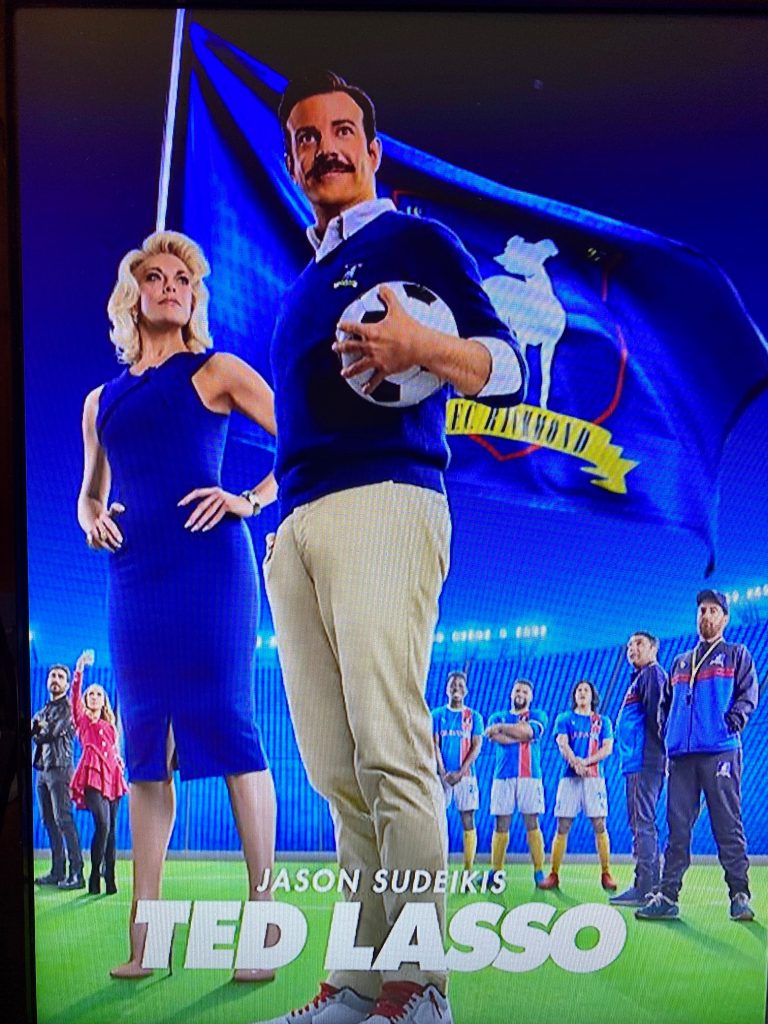 While I know I’m WAY behind the Ted Lasso curve, I finally watched seasons one and two and felt compelled to write about the show. I am happy to report that it is as good as advertised – so good, in fact, that it makes me want to get on a nine-hour flight to London. That being said, because the general consensus is that Ted Lasso is a must-watch, it’s hard to write something new. What do I say about a show that has already garnered so much critical acclaim? I’m going to try.

In a time when the best shows are also sometimes the gnarliest (i.e. The Bear), it’s nice to watch something that is well-written, extremely clever, features an original storyline and superb acting, and is not stressful. I love The Bear but it is heart-breaking, intense, and nerve-racking – and I’ve never worked in a kitchen! https://lauralieff.com/the-bear-is-the-best-new-show-on-television/

Conversely, Ted Lasso achieves the near-impossible by presenting a feel-good plot without being cheesy, introducing the audience to characters who are both authentic and unique, and avoiding retelling a story that’s already been told. Though there are episodes that eloquently depict anxiety, family issues, and the importance of maintaining integrity, these situations are all handled with grace and humor.

SPOILERS: Even though I’m very late watching this show, I am so happy that no one spoiled anything for me so I want to be sure I avoid spoiling anything for anyone who has not seen it. Don’t read the rest of this if you haven’t watched both seasons from start to finish.

1) The writing is incredible. Seriously, it’s some of the best.

The Ted Lasso cast is not small and yet every character is important which is a testament to the writers. Ensemble shows are hard to pull off because creating details about a large number of people, and making the audience care about each person, can be laborious. The fact that everyone (from the Richmond jersey-wearing, diehard bar trio always screaming at the television to wealthy, wounded, and intimidating team owner Rebecca) matters is a writing triumph.

2) Character development is everything and this show makes it happen.

While not every character has to go through some kind of metamorphosis to be significant, it’s nice to see thoughtful development over the course of two seasons. For example, Rebecca turns into someone we want to root for, Keeley becomes way more than the star player’s girlfriend, and veteran player Roy Kent becomes the (fucking!) hero we want him to be.

3) It’s arguably the most quotable series of all time – and this is coming from someone who is a huge How I Met Your Mother fan and quotes that show a lot.

Ted: “Our goal is to go out like Willie Nelson – on a high!”

Roy: “You deserve someone who makes you feel like you’ve been struck by fucking lighting – don’t you settle for fine.”

Ted: “I shouldn’t bring an umbrella to a brainstorm.”

Deborah: “The best way to deal with people like that is to make sure they know they can’t get to you.”

Ted: “There are two buttons I never like to hit: that’s panic and snooze.”

Trent Crimm: “His coaching style is subtle, it never hits you over the head, slowly growing until you can no longer ignore its presence. And though I believe this Ted Lasso will fail here and Richmond will suffer the embarrassment of relegation, I won’t gloat when it happens, because I can’t help but root for him.”

Keeley: “You have no idea the power of rhyming in this goddamn country.”

Ted: “You can fill two internets with what I don’t know about football.”

On the surface, Rupert is charismatic and fun. In reality, he is a narcissistic asshole who thrives on putting his ex-wife in awkward situations. On the surface, Keeley is a social media influencer who likes wearing crazy outfits. But she’s actually an extremely positive presence, a savvy businesswoman, and an incredible friend who wants to support everyone around her. I appreciate this show reminding the audience that being pleasant (without being a doormat) never goes out of style.

5) Discussing the differences between America and England is both funny and informative!

We learn that the United Kingdom is a sovereign state that consists of four individual countries: England, Scotland, Wales, and Northern Ireland.

Ted: “Little tip for y’all. Fries are called chips. Chips are called crisps. And bangers aren’t great songs, but they do make you feel like dancing because they’re so darn tasty.”

Trent Crimm: “You’re an American who is now in charge of a football club, despite possessing very little knowledge of the game….is this a fucking joke?”

6) Understanding the importance of keeping the cheese in check.

Coach Lasso successfully reminds everyone of the importance of teamwork, believing, and never giving up. And, somehow, he’s able to do this without eliciting one eye-roll after another which I appreciate. Because his coaching style is hard to resist, players such as Sam, Dani, and Roy Kent back him up in ways that make everyone root for Lasso – further exemplifying why, even though he doesn’t know much about soccer (football), he does know how to get results.

7) Nate goes from best to worst and Jamie goes from worst to tolerable.

Ugh Nate. You started as the ultimate Cinderella story and then you went to the dark side. I didn’t see that coming – which is one of many satisfying aspects of this show – but it is also why your hair quickly changed from black to grey.

Jamie you are the quintessential pain in the ass pretty boy who gets away with being a jerk because you’re a talented athlete. In your defense, I’m glad we find out why you are the way you are and that you put some effort into being a better human.

8) The show’s ability to move between humor and heartfelt at the drop of a quote:

“It’s just a group of people who care, Roy. Not unlike folks at a hip-hop concert whose hands are not in the air.”

“I promise you there is something worse out there than being sad, and that’s being alone and being sad. Ain’t no one in this room alone.”

9) A reminder that everyone needs a wingman/wingwoman.

Coach Beard is bizarre but effective as Lasso’s righthand man, as he’s always there with the subtle jokes and nuanced comments. He supports his coaching partner and friend by correcting him when necessary, without giving him a hard time. For example, in the team-building episode where everyone puts an item into a trash bin to burn after explaining its importance, Lasso is ready to light a match inside the locker room. Instead of making fun of Lasso, Beard blurts out, “Maybe we should do this part outside!” Everyone agrees.

Another fun example is this conversation that also lends itself to #5 on this list:

Ted: He must be from England.

Ted: Is that another country?

Beard: Yes and no.

Ted: How many countries are in this country?

One or two-word answers. Deadpan. Brilliant.

Witty dialogue, realistic banter, incredible athletes, a new and exciting storyline, stellar acting, and unforgettable characters. This show explores a little bit of everything and ties it all together in a way that’s genuine, clever, and fun. Watching fans root for their team regardless of the outcomes, a fish-out-of-water coach winning over the haters, the importance of teamwork, and the necessity of a sports psychologist, among other storylines, has been a pleasure. I’ll be watching both seasons again because there are definitely one-liner gems I missed. In the meantime, I can’t wait for season three.