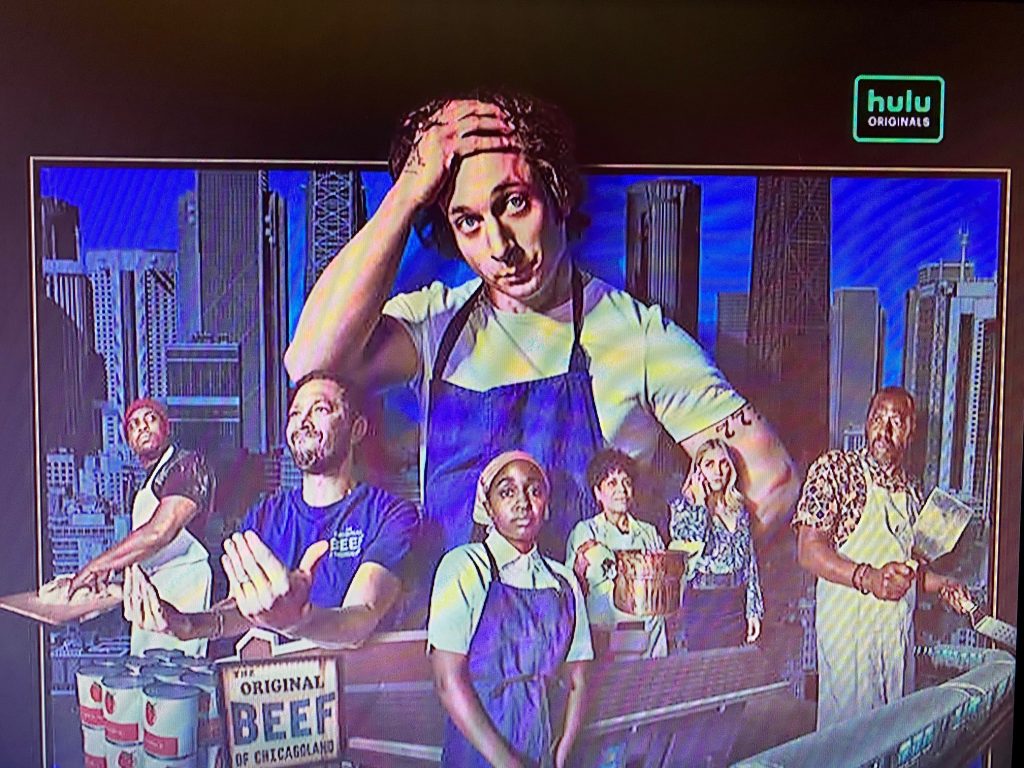 I’ve never worked in a restaurant. Actually, that’s not true. On St. Patrick’s Day over a decade ago, I walked into my friend’s restaurant to say hi and have a drink after work only to find out that, on one of his busiest days of the year, he had no hostess. I offered to help, and, knowing full well that I had zero restaurant experience, he let me. With a line out the door and inebriated customers wanting food and drinks immediately, someone who knew nothing was better than no one at all.

After that night my feet were killing me, I was exhausted from being yelled at by impatient customers, and all I wanted to do was drink a gallon of water and go to sleep. But it was still a fun experience that I will always remember. So when two friends recommended watching a show called The Bear, which one of them described as “the most accurate portrayal of what happens in a restaurant kitchen” they had ever seen, I was all in. She also added that it caused “massive anxiety” for her husband who used to work in a kitchen. Even though I don’t cook and get made fun of for my bland palate, I still think the culinary world is interesting. I’ve read Anthony Bourdain’s Medium Raw and Joe Bastianich’s Restaurant Man, I enjoy watching MasterChef, I’ve attended the Aspen Food and Wine Festival, and just so happen to surround myself with people who are excellent cooks – including my significant other. Therefore, an authentic look at the restaurant business that brings something different than Bourdain (RIP), Gordon Ramsey, and the rest of the celebrity chefs out there sounded like something I should check out. Wow am I glad I did.

From the first minute of the first episode, it’s clear that the intensity is not going to let up. Ever. A family tragedy leads to Carmen, who is a James Beard award-winning chef, leaving his job at the famed fine dining establishment French Laundry in Napa Valley to take the reins at his brother’s Chicago sandwich shop. Big brother Michael left it to Carmen after he died by suicide – a decision no one understands since Michael never allowed his brother to work there when he was alive. As a result, Carmen is heartbroken about losing his sibling, confused about what happened, and determined to do whatever it takes to elevate The Original Beef of Chicagoland (yes, that’s actually the name of the restaurant) into a well-run, respectable place that makes money.

Although the restaurant already has a local following, it is a disorganized, dirty, chaotic shit show that is in desperate need of Carmen’s overqualified help. But there is a cast of characters that come with the place that don’t like change, think Wine Country is bullshit, and aren’t interested in Michael’s little brother coming in and making them do things his way. The biggest pain in the ass of an entire kitchen of pains in the ass is Richie who is played brilliantly by Ebon Moss-Bachrach. He is Michael’s best friend (which is why Carmen calls him “cousin”) and is a nightmare for so many reasons. But Richie’s loud mouth and overall obnoxious and exhausting demeanor is only the tip of the iceberg. There is also a ton of mysterious debt owed, a menagerie of family members who are worried about Carmen’s workaholic nature (especially his sister Sugar who is masterfully played by Abby Elliott), and a general lack of understanding as to why Michael left everything in such disarray.

Does all this sound intense? It is. Every second of the show is intense, alluring, and emotional because the employees care about the restaurant – to the point of paralysis. By that, I mean that even though they know that the current state of things isn’t working, they still have to be repeatedly convinced that change is necessary. Each episode is approximately 30 minutes but so much happens that you can’t leave the room without pressing pause because you will miss something. A comment, an ingredient, a moment, a look. But that’s what makes this show great. Starting with the opening scene, you are thrown into the first of many crises and immediately you want to know more. About everything and everyone involved. You care about Carmen’s actual family and his work family. They are dysfunctional and insane, but you want to know everything. And you can because the entire first season (eight episodes) is available on Hulu and the show has already been renewed for season two. That is how good it is.

But the action isn’t everything. The acting is on point too. As Carmen, actor Jeremy Allen White is incredible in every scene as he somehow exhibits intensity and restraint, anger and resilience, sorrow and perseverance, and anxiety and calmness all at the same time. His character is complex, tortured, brilliant, and humble. Unbelievably humble. While I enjoyed watching/reading Bourdain and respected him very much, his arrogant so-called bad boy chef prototype is tired and I’m so glad Carmen is not that person. Also, Ayo Edebiri is excellent as Sydney Adamu who is equal parts type-A prodigy who wants to learn from the best (Carmen) and impatient youngster who wants things done her way even though she’s the newest member of the team. Lionel Boyce is fabulous as Marcus who soaks up and indulges in all the expertise and creativity Carmen has to offer and Liza Colón-Zayas as Tina effortlessly shows how a character arc should be portrayed – even though she takes the most time to convince that the old way of running things sucks.

Watch the show, brace yourself for the anxiety, and get ready for one of the best season one finales I’ve ever witnessed on television. If White doesn’t earn an Emmy for his monologue in episode eight, I don’t know who should.