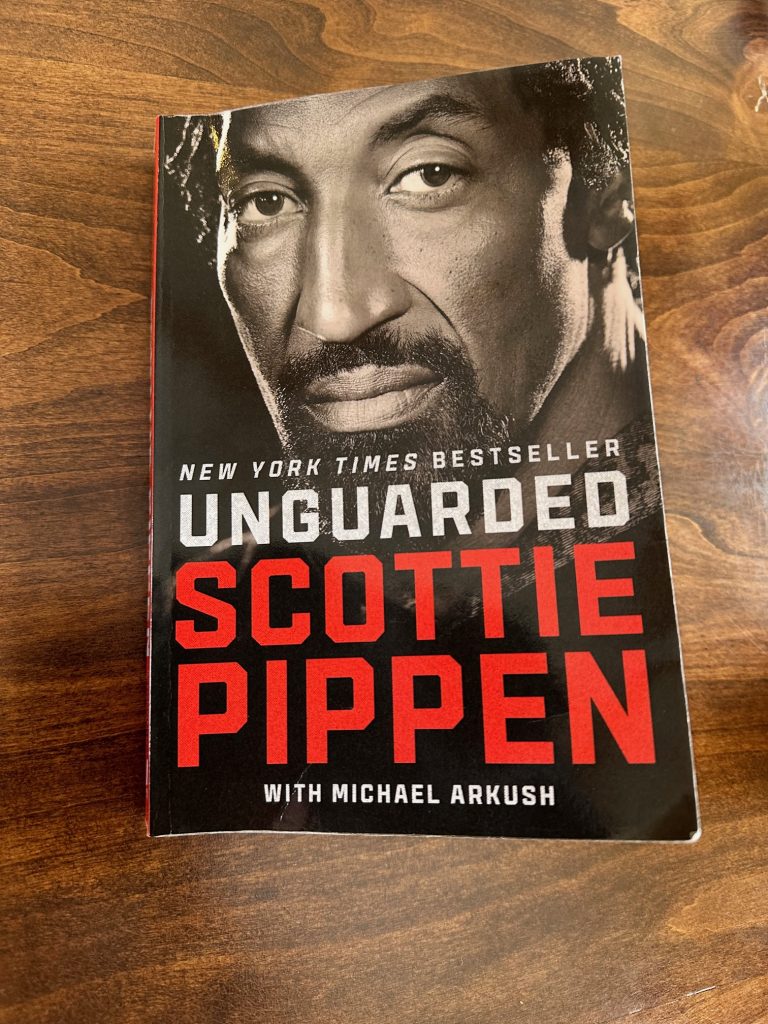 Wow did this book surprise the hell out of me! I’ve been a basketball fan my whole life – both playing and spectating. When I was a kid in the 1990s, I was lucky enough to attend many Miami Heat playoff games with my parents, aunt, uncle, and cousin. All these years later, we are still Heat fans and still remember what it was like watching Tim Hardaway, Alonzo Mourning, and PJ Brown battle it out against players like Patrick Ewing, Charlie Ward, John Starks (New York Knicks), Horace Grant (Orlando Magic), and, of course, Michael Jordan and Scottie Pippen from the iconic Chicago Bulls.

Watching Jordan and Pippen play is something I’ll never forget because everyone at the Miami Arena knew they were watching two of the best of all time. We knew it was a moment in time and that we were lucky to see it live. So when I picked up Pippen’s book Unguarded, I expected to read about his childhood, family life, path to the NBA, what it was like playing with Jordan, his personal life, and his experience winning six championships. Although Pippen touches on all of those topics, the book is more of a score-settling manuscript that an autobiography. And it all started after the June 2020 release of the Netflix documentary The Last Dance:

Pippen is pissed. He wrote this book because he is pissed. Published in November 2021, Unguarded begins with a prologue that talks about The Last Dance being one-sided, all about Jordan, and how it makes the Bulls’ reign sound like anything but a team effort. Pippen says, “Each episode was the same: Michael on a pedestal, his teammates secondary, smaller, the message no different from when he referred to us back then as his ‘supporting cast.’” He goes on to say that Jordan wouldn’t be Jordan without his team (Horace Grant, Steve Kerr, BJ Armstrong, Dennis Rodman, etc.) which is a major theme throughout the narrative: basketball is a team sport and the Bulls won championships, not one person. Pippen also points out that Jordan earned $10 million for “the doc” (as he calls it) while the rest of the team received zero – which was shocking – and says, “Bottom line: the doc fails to give my Hall of Fame career the treatment it deserves.” Ouch.

At that point I realized what was happening. Scottie Pippen wrote this book to settle scores and set the record straight – well, straight from his point of view. His tone in this book quite the departure from his calm and collected demeanor I’ve seen in interviews – including those in The Last Dance. To say he feels slighted is understatement.

Until I read Unguarded, I had no idea that Pippen and Jordan have never been and are not friends. I had no idea that he harbors so much animosity – especially for someone who he will always be inextricably linked to in both his professional and personal life. Pippen says he isn’t close to Jordan but then he chose him to induct him into the Hall of Fame. One of the more shocking details in the book is when Pippen says (admits?) that he didn’t call Jordan after Jordan’s father was murdered because he “didn’t have his number.” How is that possible? Seriously. How? Two paragraphs later he states that he should have made a stronger effort and admits that he was having trouble dealing with his own grief and couldn’t take on Jordan’s as well. Fair enough but then why mention it at all?

When Pippen talks about his childhood, it’s clear that it was hard for him to write about growing up in poverty in Arkansas as the youngest of 12 with a brother and father who ended up in wheelchairs. Although he explains their situations with grace, he also says that living with two people whose lives were changes forever took a toll on the entire family. Later he discusses his experience clawing his way into college and the NBA with both angst for those who underestimated him and appreciation for those who believed in him.

Conversely, Pippen talks very little about his personal life. On page 82 there is one short paragraph about his first wife Karen (they divorced in 1990) and first child Antron. He says, “I made a commitment to another family, my teammates. For which I have no regrets.” That is not a good look for Pippen at all. Although he is being honest, he sounds like an asshole. But then on page 84 he says, “Being surrounded for as long as I could remember by eleven brothers and sisters who loved me unconditionally, I never felt the need to win someone over. They were my best friends then and always will be.” That’s a little better.

Although the book focuses on his basketball career, it’s interesting that he talks way more about his parents and siblings than he does his own children. In fact, the one family member who is mentioned frequently throughout the book and is given a ton of credit for Pippen’s success is his mother Ethel. He gives her credit for everything. Everything. At the end of the book, he briefly talks about his then-current wife Larsa (although they have since gotten divorced) and the six children he shares with her. He also quickly mentions that Antron tragically passed way in April 2021. It’s so awful. I don’t know what to say.

Throughout the book, Pippen points out other people’s mistakes as much as he admits to his own, and there are a lot of times where his gripes sound more like sour grapes – but that doesn’t necessarily mean he’s wrong. That being said, the large chip on his shoulder seems to grow as the pages turn. The parts of the book where Pippen (sort of) addresses the reader are clever and show that he is aware of how he is coming off: “People might roll their eyes when they read this but I’m serious.” Yep! He is funny when he wants to be and is not afraid to give himself a hard time.

But I cannot reiterate enough my shock regarding the level of angst and animosity he displays throughout this narrative. His little digs at Jordan are sprinkled throughout: “Be like Mike? I wanted to be like Magic [Johnson].” But then he shows true sportsmanship and love of the game when he talks about keeping the game ball from when the Bulls won the 1991 championship as a souvenir and being chosen to be part of the 1992 Olympic Dream Team in Barcelona: “There is no feeling like it. That includes wining an NBA championship…What a time it was.”

One person Pippen definitely admires is Phil Jackson. In some instances, when he describes Jackson, it almost sounds Ted Lasso-esque. Obviously Jackson was much more hardcore than Lasso but Pippen describes his former coach as always making sure the team believed in themselves and one another and it doesn’t get any more Lasso than that. Also, when he continually reiterates the importance of “making the extra pass” and explains that Jackson “was never afraid to make the decision no one expected” I could hear the Ted Lasso theme song as I was reading.

Overall, Unguarded is an unapologetic story of stats and emphasizing the importance of a team effort, while calling out everyone along the way. Anyone who is a basketball fan will enjoy the book – who doesn’t love a raw, tell-all story? – and some will be surprised at both the tone and the content. Regardless of Jordan’s monumental fame and popularity, Pippen will always be remembered as one of the greatest basketball players in history. He earned his spot next to his idols like Larry Bird, Dr. J, Magic, and even Michael Jordan. I’m glad I got to see him play during the glory days of the Bulls – even if it meant watching them win against the Heat.

I totally forgot about the 1994 baseball labor strike. If that season hadn’t been cancelled, I wonder if Jordan would have still returned to basketball.

Throughout the book, Pippen takes the reader through several finals games and literally gives the play-by-play of what goes on. In some narratives, this would get really old – especially constantly reciting players’ stats – but it works in this book.

The list of people Pippen hates is not short: Jerry Krause, Doug Collins, Isiah Thomas, Joey Crawford, and Hue Hollins, among others.

But there are also people he admires: His parents and siblings, Muggsy Bogues, Mo Cheeks, Phil Jackson, Magic Johnson, and Horace Grant. Those relationships prevail throughout the narrative.

“To be a member of the Bulls during the 1990s was to be part of something magical. For our times and for all time.”

“Anything can happen in a Game 7. An injury. A poor call from the officials. A miracle shot. Anything.”

“Now that we were the champions, every minor incident had the potential to become a major story.” An unfortunate truth about some members of the media who are always looking to bring down a star.

“What the doc [The Last Dance] could not capture – no footage possible could – was what it felt like to watch the best players in the world put their heart and soul into a game that meant nothing. And everything.”

On the Bulls winning their third title: “The third time felt different than the first two. We didn’t just earn another ring. We earned a place in history.”

“I’ve always believed it is the responsibility of every veteran player to look out for the next generation, to leave the game in a better place.” That’s the Pippen we want to see.

On the Bulls in 1997/1998 season: “Was this a professional basketball franchise or a daytime soap opera? Both, if you want to know the truth.” Once Jackson signed on for one more season (i.e. the last dance), so did Jordan and Dennis Rodman. “The Bulls, an old team, looked like a rock group preparing to go on a farewell tour.” HA! I can only imagine!

Early in his career, Pippen played in a tournament called the Aloha Classic in Hawaii and won the slam dunk contest. The prize was a boom box!

The first NBA game he attended was the first one he played in which was at the start of the 1987-1988 season.

Horace Grant has a twin named Harvey who played for the Washington Bullets.

Michael Jordan is scared of snakes!

Before Magic Johnson and Larry Bird played for the NBA starting in 1979, the league wasn’t popular so the finals were often shown on a tape delay after the eleven o’clock news.