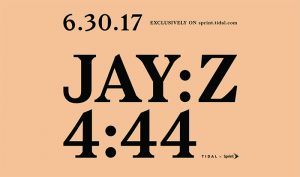 On April 3, 2017, I wrote about how streaming was saving the music industry because, after the 1998 crash that was Napster, the music business was finally experiencing an upswing. Earning $7.7 billion in 2016, the music industry was in the best shape it had been in since the late nineties, and had streaming services like Spotify and Tidal to thank for fifty percent of that figure:

But now, just two and half months later, another shift seems to be taking place. When I visited rollingstone.com earlier today, the first thing that popped up on the top of my screen (and down the right side of my screen) was a peach colored advertisement announcing that Jay-Z’s new album is called 4:44, its release date is June 30, 2017, and it will be sold exclusively on sprint.tidal.com.

While artists releasing albums “exclusively” on streaming sites is nothing new, I had never seen a worldwide company like Sprint attached to an album release or a streaming service like Tidal. In this case, since Jay-Z is a founder and co-owner of Tidal (his wife Beyonce is also a co-owner), of course he is going to take that avenue to release his latest record. According to Wired, Sprint got involved a few months ago when the company acquired 33 percent of Tidal which means they are counting on 4:44 to do well – especially since it’s the rapper’s first album in four years.

Although I’ve always understood the idea behind streaming services – people subscribe to the service and pay a monthly fee to get access to countless songs – I’ve never been a fan because I prefer to own my music. For those who prefer streaming, I thought one of the main selling points was that subscribers had access to music that was released “exclusively.” But so far it seems like most artists’ music ends up on iTunes anyway so what’s the incentive? I was able to buy whichever songs I wanted from Beyonce’s Lemonade on iTunes a few days after its initial release and, although Prince’s final album HITnRUN Phase One was first made available on Tidal in 2015, it was released on CD and download a week later.

So are streaming services meant for the jonesers who can’t wait a few days for new music to appear on iTunes or is it more for the people who don’t care about owning music? Maybe it’s both. Apparently, all 45 million of Sprint’s customers can visit sprint.com, sign into their account, and get six months of Tidal for free which, of course, includes access to 4:44. All that is fine – if I was a Sprint customer I would just consider it an added perk of an account I already have – but a few questions remain: Will people switch to Sprint to get access to Tidal and Jay-Z? Which company will benefit more from the partnership? Will Sprint be seen as the cooler cellular company because it’s associated with one of the biggest names in hip-hop? Finally, if 4:44 will eventually be available on iTunes (like the rest of his albums, Lemonade, and HITnRUN, among others), is the Sprint deal really that valuable after the six-month trial?

It will be interesting to see how 4:44’s release is handled beyond Tidal. On April 23, 2016, Lemonade was made available on Tidal, then it was released for paid purchase the following day, and then it became available for purchase by track or full album to Amazon Music and iTunes on April 25. Brick and mortar retailers had to wait until May 6. Will Jay-Z force people to subscribe to his streaming service (or become Sprint customers) or will he decide that he wants to sell as many records as possible and make it available to the world? Because he’s a businessman I’m thinking the latter but we’ll all find out on June 30.