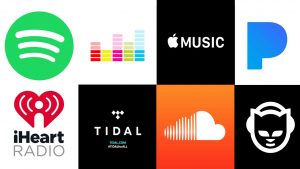 While it’s no secret that the music industry has been declining since Napster reared its ugly head in 1999, who would have thought that, eighteen years later, streaming services would become the industry’s savior.

A recent report from the Recording Industry Association of America, the trade group that represents the major labels, demonstrates an 11.4 percent upswing in 2016 from the year prior. Raking in $7.7 billion, the music industry is in the best shape it’s been in since 1998. How much did streaming contribute to that number? Fifty percent! In fact, streaming earned $3.9 billion in 2016 and is clearly becoming the way most of the country gets their music.

Although I still make mix CDs (yeah, you read that right), buy songs on iTunes, and spend way too much money on vinyl, services like Spotify and Apple Music are the clear frontrunners in terms of music consumption. According to The New York Times, these services boast an average of 22.6 million subscribers and have produced earnings of $2.3 billion which is almost double from the previous year. Globally, Spotify apparently has 50 million subscribers and Apple Music has over 20 million.

While it’s exciting to read about a music industry upswing, the record store-loving side of me can’t help but point out that streaming music isn’t the same as owning it. My radio show co-host uses Spotify religiously and he loves it! But I like owning the music I love. One avenue isn’t right or wrong or better than the other – it’s just different. Some people don’t care what they own as long as they have access. My music collection has and always will be extremely important to me and I will always prefer owning albums because they tell a story.

Not surprisingly, CD sales continue to plummet and I can’t imagine why that would change. According to The New York Times, 2016 saw just 99.4 million full-length CDs sold in the United States equating to $1.2 billion. That figure marked the first time since 1986 that fewer than 100 million were sold. Additionally, downloads were down 22 percent last year to $1.8 billion which reiterates that in terms of music, access now trumps ownership.