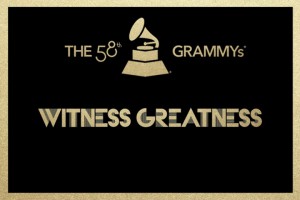 Music’s biggest night! Here are my highlights and commentary:

(Continue reading only if you’ve seen the show – this post contains spoilers).

-Taylor Swift isn’t always my favorite but her sequined onesie with matching boots was a Grammy-worthy outfit if I’ve ever seen one!

-My birthday is September 7 – just in case anyone wants to steal LL Cool J’s “LL” broach and give it to me.

-Loved seeing Ice Cube and his son (aka his twin) present Best Rap Album. An innovator and an innovator in training.

-The Weekend is an entertainer who clearly likes to channel Michael Jackson but I’m too distracted by his horrible hair to care about him.

-Meghan Trainor killing it with her new brunette hair and paying homage to Lionel Richie was my favorite part of that performance – as was Dave Grohl jamming to Lionel with his red solo cup.

-Stevie Wonder making fun of the audience for not being able to read brail was hilarious!

-Tough watching so many tributes this year – rest in peace Maurice White, Lemmy Kilmister, David Bowie, B.B. King, and Glenn Frey, among others.

-Apparently that Target commercial/Gwen Stefani music video was the first-ever music video created on live television. It was cool but I’m never a fan of lip-syncing.

-Although I like Alabama Shakes, I’m not sure how they beat Foo Fighters and Florence + The Machine for Best Rock Performance.

-Welcome back to the Grammy stage Adele – you are amazing. Also, everyone who wins tonight is lucky that 25 wasn’t eligible for this year’s award show.

-Lady Gaga’s tribute to David Bowie will be talked about for years to come. She nailed it.

-Dave Grohl talking about Motorhead’s Lemmy Kilmister was awesome – a legend paying homage to another legend. And then the Hollywood Vampires performed on television for the first time ever! Ace of Spades! Check out my October 9 post to learn more about the hardest rocking cover band of all time: https://lauralieff.com/the-best-rock-roll-cover-band-ever/

-Congrats to Taylor Swift for winning Album of the Year –very cool that she is the first female solo artist to win the award twice. That being said, she needs to work on her “Oh my god I’m so surprised” face.

-Record of the Year went to exactly who deserved it – Mark Ronson and Bruno Mars for “Uptown Funk.”