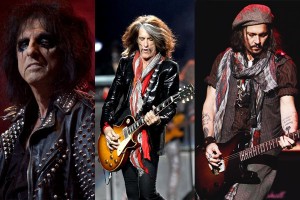 Have you ever heard of the Hollywood Vampires? Neither had I until yesterday but I definitely recognize the founding members of what is without a doubt the most famous supergroup in the history of rock and roll! Here there are:

Alice Cooper – A singer, songwriter, musician and occasional actor whose career has spanned five decades, he is credited with helping to shape the sound and look of heavy metal by being the first artist to introduce “horror imagery.” Since 2004 he has hosted a classic rock radio show called Nights with Alice Cooper and in 2011 he was inducted into the Rock & Roll Hall of Fame.

Johnny Depp –  Although he’s most known for his acting work over the past three decades (i.e. Edwards Scissorhands, Pirates of the Caribbean, Fear & Loathing in Las Vegas), Depp has also played guitar since he was a child. Over the years he’s played with a long list of bands and musicians including Oasis, Shane MacGowan, The Lemonheads, and Marilyn Manson. He was also a member of P, a group featuring Butthole Surfers singer Gibby Haynes, Red Hot Chili Peppers bassist Flea and Sex Pistols guitarist Steve Jones.

Joe Perry – As lead guitarist, backing and occasional lead vocalist, and contributing songwriter for Aerosmith, Perry has enjoyed a music career that has been going strong for over 40 years. He was ranked 84th on Rolling Stone’s list of The 100 Greatest Guitarists of All Time and in 2001 he was inducted into the Rock and Roll Hall of Fame as part of Aerosmith.

Named for the drinking club comprised of 1970s famous male rock stars that included John Lennon, Ringo Starr and Keith Moon, the Hollywood Vampires released their self-titled debut studio album on September 11, 2015 for Republic Records. Recorded as a tribute to the music of the rock stars who died from excess in the 70s, the album features guest appearances by Paul McCartney, Robby Krieger (The Doors), Dave Grohl, Slash, Brian Johnson (AC/DC), and Perry Farrell, just to name a few. On September 16 and 17, 2015, the group performed at the Roxy Theatre in Los Angeles where the three core members were accompanied by the former Guns N Roses rhythm section (bassist Duff McKagan and drummer Matt Sorum), along with guitarist Tommy Henriksen and Bruce Witkin on keyboards and additional guitar. Guest performers for both nights also included Tom Morello (Rage Against the Machine), Perry Farrell, and Marilyn Manson, among others.

If you’re a rock fan download their album or at least their versions of “My Generation,” “Whole Lotta Love,” “Manic Depression,” and “School’s Out/Another Brick in the Wall.” With this much talent in one band it’s hard to go wrong but this band goes further than just covering rock classics. The shredding guitar and on-point vocals sound like a band that’s been playing together for decades rather than three people who have had independently monumental careers for longer than I’ve been alive. Trust me you’ll be impressed.