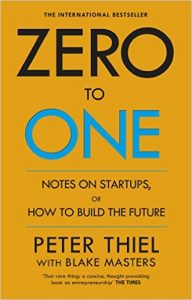 A few weeks ago the book Zero to One was mentioned in a weekly meeting I attend for entrepreneurs in the Vail Valley. The leaders of the group explained that the book was written by Peter Thiel, the founder of PayPal and one of the first investors in Facebook, and was one of the reasons they started the group two years ago. When I heard that I decided to give it a try and I’m so glad I did.

Written with the help of former Stanford student Blake Masters, who took Thiel’s “Computer Science 183: Startup” class (and excellent notes) in 2012, Zero to One discusses the importance of creating something new and how an innovative business venture can change the world. By using current examples such as Apple’s Steve Jobs, Facebook founder Mark Zuckerberg, and even himself (along with his team of five), who created a way to pay for anything online, Thiel explains, in an intelligent but approachable way, how to make startups and new businesses succeed. The term “0 to 1” comes from the idea that while imitating others takes the world from 1 to n, contributing something new takes things from 0 to 1. Rather than competing with others who are doing the same thing, Thiel encourages thinking outside of the box and delivering something original.

Although he makes it clear that the book is not a how-to guide, he does give the reader a lot to think about. Here are some of Thiel’s wise words and a few facts I thought were interesting:

-Work with others to get stuff done but stay small enough so you can actually accomplish your goals.

-Creating value isn’t enough – capture some of the value you create.

-There is no middle ground – either don’t throw any punches or strike hard and end it quickly.

-Businesses must start with small markets.

-Have agency not over just your own life, but over a small and important part of the world.

-When you choose a career you are acting on the belief that your work will still be valuable decades from now.

-Nutrition matters for everyone but you can’t major in it at Harvard.

-You can’t build a great company on a flawed foundation.

-No company has a culture because every company is a culture.

-If you’ve invented something new, but not an effective way to sell it, you have a bad business no matter how good the product.

-A product is viral if its core functionality encourages users to invite their friends to be users as well.

-Your company needs to sell more than its product.

-You should never assume that people will admire your company without a PR strategy.

-The most valuable businesses will be built by entrepreneurs who seek to empower people rather than make them obsolete. For example, computers can handle data processing but can’t correctly identify a cat 100 percent of the time which is why technology won’t replace professionals. Instead, it will allow them to do more.

-Customers won’t care about technology until it solves a particular problem in a superior way.

-Doing something different is what’s truly good for society.

-It is both more powerful and dangerous for a company to be led by a distinctive individual.

-Napster gained 10 million users in its first year making it one of the fastest-growing businesses of all time.

-Founders are important because a great founder can bring out the best work from everyone in the company.

-Our task is to find singular ways to create the new things that will make the future not just different but better – by going from zero to one.