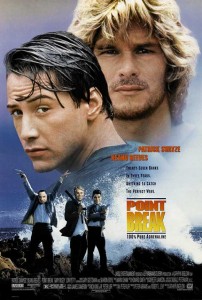 Ladies and gentleman Point Break is making a comeback and I can’t wait to see what they do with it! For the two people on the planet who have never seen the movie let me give you a little background: Starring Keanu “Whoa” Reeves and Patrick “I like to use dance moves and karate in every movie I’m in” Swayze, Point Break is a 1991 gem about an FBI agent going undercover to nail bank robbers/surf bros by infiltrating the group in southern California.

Reeves is Johnny Utah, a former college football star turned agent and Swayze is Bodhi, an adrenaline junkie/surf god/hippie Zen nutjob who leads a pack of surf friends/bank robbers called the “Ex-Presidents.” While Utah is supposed to be figuring out who the bank robbers are by befriending the surf group, he ends up liking Bodhi more than he thought. (This doomed friendship is very similar to 2001’s The Fast and the Furious because it borrowed a few ideas from Point Break: Paul Walker’s character befriends Vin Diesel’s Dom who is the leader of the car racing/semi-truck robbing gang).

Now back to the surf movie. Here are a few examples of why this movie it’s so good:

-Before Gary Busey completely lost his mind he played Agent Angelo Pappas and was actually really good in the role. He describes the Ex-Presidents as “ghosts” because “they vanish…like a virgin on prom night.”

-1991 was when Red Hot Chili Peppers singer Anthony Kiedis still had long hair and wore high-top Chuck Taylors. He has a small role in the movie as a local surf nazi who hates amateur surfers and delivers key lines like: “That would be a waste of time…”

-When the head of the FBI (played brilliantly by John C. McGinley) asks Utah if he has anything of interest to tell him regarding progress on the case, Utah, wearing a tank top and holding a pink surfboard replies, “Caught my first tube this morning, sir.”

-Bodhi waxes hippie logic about the 100-year storm and people listen like he’s the Buddha of the surf world: “Everything moves in cycles. So twice a century, the ocean lets us know just how small we really are. A winter storm comes out of Antarctica, tearing up the Pacific. And it sends a huge swell north 2,000 miles. And when it hits Bells Beach, it will turn into the biggest surf this planet has ever seen and I will be there.” Mind blown.

Even with its ridiculous dialog and unnecessarily long sky-diving scene, the movie is a classic. It has also been endlessly quote and spoofed, with the most recent example being a Priceline commercial that debuted in August 2012. With a budget of $24 million, the film went on to make $43.2 million in North America and $40.3 million internationally for a worldwide total of $83.5 million. Director Kathryn Bigelow (the former Mrs. James Cameron and the woman behind the Oscar-winning film The Hurt Locker) was not afraid to make funny references such as in one scene where Utah says to Bodhi, “Meet me at Patrick’s Roadhouse” referring to another classic Swayze movie Road House, released two years prior.

So what will Point Break version 2.0 be like? Apparently Ericson Core, the cinematographer whose credits include the original The Fast and the Furious (hmmm – see paragraph two of this post) has signed on to direct the movie. There are also reports that the new film will be set in the international world of extreme sports as opposed to the southern California surf scene of the original, but the element of an FBI agent infiltrating a crime ring remains the same. No word yet on who will star.

Can’t wait to see what they do with version 2.0 and really hope that Reeves makes an appearance and pays some kind of tribute to Swayze. Surfs up brah – see ya in 2014.