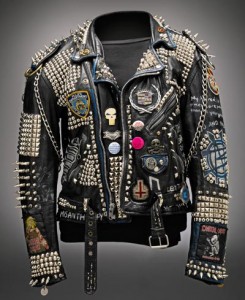 James Dean, Marlon Brando, Axl Rose, Elvis Presley, Sid Vicious, the Hells Angels. Just a few of the icons who made leather jackets synonymous with cool. And now there is an exhibit in a museum in Seattle that was created to demonstrate how leather jackets will forever be cool. I love it! Leather jackets have been a staple of rock and roll and rebellion for decades and I’m so excited that these jackets are receiving so much attention!

Recently Seattle’s EMP Museum opened an exhibit called “Worn to the Wild: The Black Leather Jacket” which celebrates how one article of clothing became iconic in film, fashion and music.

The exhibit, created in partnership with the Harley-Davidson Museum, features dozens of jackets from the first one made by Harley-Davidson in 1929, to notorious leather wear worn by some of the most badass stars in pop culture history. Tracing the leather jacket’s design history from protective gear to revolutionary garb, the exhibit explains that the garment was primarily worn by aviators during WWI and WWII. Once the leather jacket landed back home it became the apparel of choice for bikers and remains a symbol of cool.

In addition to the leather jackets themselves, the flair adorning the jackets is also on display is it is part of what makes them as unique as they are iconic. From biker gangs to the punk rockers, flair consisted of additions like patches, paint, skulls, extra zippers, sequins, studs and more.

If I ever find myself in Seattle I am definitely going to the EMP museum. Described as “a leading-edge, nonprofit museum dedicated to the ideas and risk-taking that fuel contemporary popular culture,” the museum is also featuring exhibits about the Rolling Stones, Jimi Hendrix and Nirvana. Yeah…it might be time for a trip to the northwest.