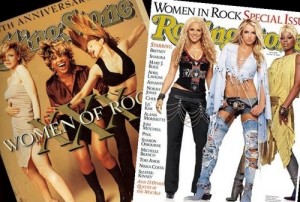 In November 1997, Rolling Stone published an issue called “The Women of Rock” for the magazine’s 30th anniversary issue. I remember it like it was yesterday because it was one of my favorite issues of the magazine for which I’ve had a subscription for 17 years. Wow that’s more than half my life…

In October 2002, Rolling Stone published a special issue called “Women in Rock” which featured Shakira, Britney Spears and Mary J. Blige on the cover. A similar group of women from the 1997 issue were discussed (this time in a section called “Women Who Changed the World”), along with some that were new on the scene including Nelly Furtado, Pink and Ashanti. Additionally, Alanis Morissette, Stevie Nicks, Norah Jones, the Dixie Chicks and Avril Lavigne were given pretty big features.

Now that the year is coming to an end it’s time to look back at the year in music – or in this case the year in female music. And what do you know – 16 years later the woman who seems to define every decade she’s a part of is still on top. Yep, you guessed it! Madonna officially topped Forbes’ 2013 list of the top-earning women in music, pulling in $125 million this year. The bulk of Madonna’s earnings came from the last leg of her MDNA Tour and she also sees income from merchandise sales, her Material Girl clothing line and her fragrance, Truth or Dare. I’m not a Madonna fan by any means but clearly everyone else in the world loves her.

Earning the number two spot on Forbes’ list is Lady Gaga who brought in $80 million this year. That number is particularly impressive when you take into account that it was calculated just before the release of her latest record, Artpop. Taking third place is Taylor Swift who brought in $55 million as a result of the huge sales of her last record, Red (1.2 million in its first week), while Beyoncé landed in the fourth spot with $53 million, thanks to this year’s Mrs. Carter World Tour. Former American Idol judge Jennifer Lopez brought in $45 million to round out the top five.

The rest of the top 10 for female earners in music includes Rihanna ($43 million), Katy Perry ($39 million), Pink ($32 million), Carrie Underwood ($31 million) and Nicki Minaj and Mariah Carey, who tied for the 10th spot with $29 million each. That last figure is hilarious considering how much Minaj and Carey hate each other.

The Forbes list used data from June 1, 2012 and June 1, 2013 and the total figures include concert ticket sales, royalties for recorded music and publishing, merchandise sales, endorsement deals and other big business ventures.

Money aside, the question remains: Other than Madonna and Carey who have been around the longest, will we still be talking about these top 10 women 16 years from now? Will Lady Gaga and Taylor Swift be making great music into their 40s and 50s? Will Nicki Minaj and Jennifer Lopez grace the cover of the 60th anniversary of Rolling Stone? I think Underwood and Rihanna have a good chance – they are pretty powerful voices – but the music biz is a fickle one and historically very hard to predict.

There will never be another Aretha Franklin, Debbie Harry, Janis Joplin, Sheryl Crow or Bonnie Raitt but I hope that women keep making great music. Nothing cooler than a girl with a big voice making audiences swoon.