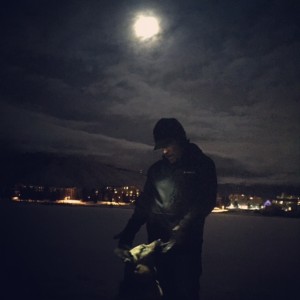 For years I have heard stories from friends who claim that when the moon is full crazy things happen. Some people can’t sleep well, others behave erratically or irrationally, etc. In Colorado, especially during the winter, mountain town locals like to snowshoe, skin, walk, etc. when the moon is full because the light reflecting off the snow makes for excellent visibility and a beautiful backdrop.

Today marked my first full moon experience and I loved it. After reading an article this morning about how the first full moon of the year is known as the “Wolf Moon” I knew we needed to take our little wolf on an adventure. According to the articles I read, January’s full moon is named after the howling wolf packs searching for food during the cold winter conditions. Thankfully the three of us were the only wolf pack walking around and the warm weather was much appreciated.

After tonight’s successful and beautiful moonlit walk, I’ve decided that while I don’t normally make New Year’s resolutions, I would like to do something outside each month on a full moon night. So I’m going to try my best to partake in 12 full moon adventures during 2015!

In the meantime, here are a few full moon fun facts and superstitions:

The full moon is a lunar phase occurring when the moon is on the opposite side of the earth from the sun and all three bodies are aligned in a straight line. Viewed from earth, the near side of the moon is fully illuminated by the sun giving it the familiar circular appearance.

Farmers refer to the harvest moon, the full moon closest to the autumnal equinox, which occurs in September. It is also called the “Elk Calling Moon” or the “Wine Moon.”

The full moon occurs every 29.5 days – the duration of one complete lunar cycle. That means that the only month that can occur without a full moon is February.

The world’s tidal ranges are at their maximum during the full moon when the sun, earth and moon are in line. Sailors know the effect as the springtide – a reference to the leap in the water level rather than the season of the year.

A full moon is considered unlucky if it occurs on a Sunday but lucky on Monday.

The full moon is the brightest object in the night sky. It has an apparent magnitude of -12.6 compared with the sun which has a magnitude of -26.8.

Some insomnia sufferers claim to have trouble sleeping during a full moon, while others say they sleep better.

The full moon is at its highest altitude from the Earth during the winter season.