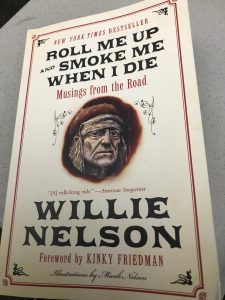 Did you know that Willie Nelson wrote a New York Times bestselling book? Neither did I – until I picked up the appropriately and hilariously titled Roll Me Up and Smoke Me When I Die. Thankfully the book is not about smoking weed – in fact there is very little mentioned of it. Instead, its author writes and rambles as he speaks in an authentic and welcoming fashion. The stories told by him, his bandmates, family, and friends paint a picture of a man who has lived, loved, fathered (seven kids!), and written some of the most memorable songs in country music history. It’s exactly what a Willie Nelson fan wants to read.

It was fun soaking in anecdotes from his bandmates – who have been playing with him for over four decades – because there is a lot to be said about the family people choose. It’s also amazing how many of his tribe talk about his incredible ability to write and how music has, starting with his grandparents, always been a family business. While most of the book is written by Nelson in the first person, the inserted family and bandmate (not that there is a difference) stories help drive the narrative – especially as the author swerves and sways his way through his own storytelling.

“He wanted to go to all the places where the music on his radio came from.”

“Willie, a wordsmith since childhood, had already spent a lifetime pursing his craft.”

“Willie…writes songs that may make you think, and some of them will stay with you for a lifetime.”

“I am so grateful to Willie for keeping me on and making me part of this adventure that has been our lives. I played my first job with Willie, and I will play my last with him too.”

“When I started this gig, I was 21 and I’m 60 now. I learned so much from watching Willie play, and his unique phrasing has given me a musical education I would have received nowhere else.”

“Willie has been a friend, a brother, a father, a boss, a benevolent dictator, a sometimes crazy motherfucker, and a great inspiration to me.”

“He is an elder of the human tribe and young beyond his years.”

“I have never felt as though I am standing in his shadow – it is instead as if he has blazed a trail of lights for me with which to cast my own shadows.”

On meeting Nelson for the first time: “That’s the moment I saw my home in his eyes. Maybe it was just a shared moment of smart-assedness.” (I can relate!)

“I am so grateful that I chose the husband I did, so that our children would be children of the world and contributors to the common good.”

“People enjoy being around him and feel comfortable in his presence…I feel blessed to have been born at this more mature point in his life as well.”

“I have always liked the way he copes with disaster.”

“I love that my dad looks at things in a different way, and I always appreciate the opportunity to do the same…He transcends boundaries, opens hearts, and unites people.”

“We were always getting booked into places that weren’t quite ready for us.”

“You have all the power there is. There is no one more powerful than you. You must be aware of it and know it; don’t doubt it.”

“Failure is not fatal. It’s inevitable that you learn from your mistakes.”

“The world looks better on a horse.”

“You get what you give.”

Referring to the power of radio from decades past: “In those days a radio station could make you or break you; I guess it still can.”

My favorite: “I owe a lot to my teachers. Thank you for showing me the way.”

“If you want to be a star, you should start acting like one now, so that when you become one, you will already know how to behave, and maybe you won’t blow it.”

Loved reading this: “Red Rocks Amphitheater is a good example of the perfect venue: the sound is great, and it’s a beautiful location. The altitude is a little tough to sing in, but after a while you adjust to it.”

“Exercise is good medicine, so follow your body – it won’t lie.”