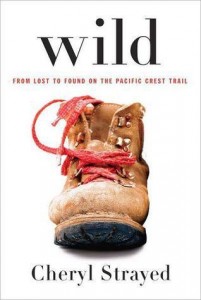 When I first heard about Wild: From Lost to Found on the Pacific Crest Trail, I wasn’t sure that I wanted to read it. I had only heard positive reviews but it sounded like a story that was a little too much: the main character’s mother dies which leads to her getting involved in heroin and then embarking on her 1,000-mile hiking journey on the Pacific Crest Trail (PCT) that she wasn’t really equipped to handle. Then I saw a preview for the film adaptation starring Reese Witherspoon and decided that, even though I’m a Reese fan, if I couldn’t get through the preview without losing it this might not be the best story for me to read. I was wrong.

Taking place in 1995, Cheryl Strayed’s memoir is written in the first person and chronicles her three-month trek that starts in the Mojave Desert, takers her through California and Oregon and ends at the Bridge of the Gods in Washington. Throughout her trip she flashes back to her chaotic childhood and life experiences that led her to take this journey:

-Her father was abusive in all senses of the word – physically, emotionally and mentally – so her childhood memories are horrifying. Although her mother saved Strayed and her two siblings, the father is such a terrible person that I hope he read the book and felt as horrible about himself as he made his wife and kids feel for years.

-The death of Strayed’s mother is an ordeal that is so tough to read I can’t believe I got through it. Her descriptions made me feel like I was with her in the hospital watching her mother die of cancer. To say it was grueling is an incredible understatement.

-As a result of her devastating loss, Strayed becomes estranged from her family, divorces her husband, becomes extremely promiscuous and experiments with heroin. At no point does she become addicted but the despair that she feels during the years following her mother’s death is almost too much to absorb.

-She decides that she is going to hike the PCT but is extremely unprepared. Her backpack (aka the monster) contains too much weight, her hiking boots are too small, she doesn’t do any training ahead of time and she has very little money. All of these issues end up making her already tough journey even harder but the courage, perseverance and humility she demonstrates throughout the book is something to admire.

As the reader, I felt like I was along for the hike which speaks to her writing talent. There’s a reason why this book is a New York Times bestseller! Strayed’s descriptions are authentic and she tells her story with a bare-bones, no-bullshit quality that made me feel like I knew her. She holds nothing back and is not afraid to talk about her weaknesses, negative thoughts, horrifying experiences or ways in which she handled or mishandled situations both in her personal life and on the trail.

There are so many well-written lines throughout this book but here are a few of my favorites:

“I’m a free spirit who never had the balls to be free.”

“The trail humbled me.”

“I was as searching as I was skeptical.”

“I’d been there for her when it mattered, but I could have been better.”

“Of all the things I’d done in my life, all of the versions of myself I’d lived out, there was one that had never changed: I was a writer.”

“I knew before I even really did, before I could have known how truly hard and glorious the PCT would be, how profoundly the trail would both shatter and shelter me.”

“Grief doesn’t have a face.”

“Everything about the place was a story.”

“It was enough to trust that what I’d done was true.”

One significant theme throughout the book is the kindness of strangers. Strayed is an attractive blonde-haired, blue-eyed woman which I’m sure didn’t hurt, but the people she met went out of their way for her over and over again. So much so that they became characters on their own because almost every person she came in contact with on the PCT was helpful and nice. It is fascinating how virtually everyone she met pointed out the size of her backpack and how they were impressed that, as a female, she was hiking the trail by herself.

Another interesting aspect of Wild is how long it took Strayed to write her story. Her PCT adventure happened in 1995 and the book was released in 2012 – 17 years later. Obviously she spent a lot of time writing, researching and tracking people down but still. Clearly telling this story was a long time coming.