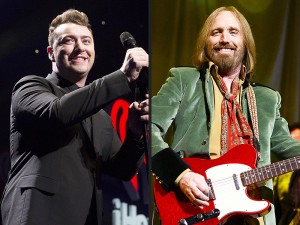 While watching Sam Smith perform his now-Grammy winning song “Stay With Me” last night I kept thinking that it sounded a little bit too familiar. And I was right. Smith, who won four Grammys including Song of the Year and Record of the Year for “Stay With Me,” has been going through a lawsuit with legendary rockers Tom Petty and Jeff Lynne. Petty and Lynne sued Smith for his song sounding too much like 1989’s “I Won’t Back Down.” The pair won the lawsuit resulting in the two veteran rockers walking away with a 12.5 percent stake in Smith’s song.

Two side notes: 1) After thanking everyone and their mother last night for his awards, Smith still chose not to thank Petty. Maybe he didn’t want to draw attention to the lawsuit or maybe he just doesn’t want to give someone else credit for his wins – even though he did thank his ex for breaking his heart and getting four Grammys out of it…oh well. 2) The length of “I Won’t Back Down” is 2:57 while “Stay With Me” is 2:53 – really Sam? Only a four-second difference? Come on man!

Anyway, all that said, Smith isn’t the only one who has had to pay for plagiarism. Here are three examples of artists who had to shell out money for their lack of creativity:

Country legend Johnny Cash was forced to pay composer Gordon Jenkins $75,000 for using lyrics and melody from Jenkins’ 1953 track “Crescent City Blues” as the basis for his own 1955 song “Folsom Prison Blues.” Although Cash changed the song’s theme, the lyrics, including the opening lines, “I hear the train a-comin, it’s rollin’ ‘round the bend” were too similar to ignore.

If you listen to Hammond’s song it is very clear that Radiohead lifted the song (I knew there was something sketchy about that band!) and as a result Hammond and Mike Hazelwood, the writers of 1973’s “The Air That I Breathe,” won the lawsuit. They were given the writing credits for Radiohead’s 1992 song “Creep” due to similarities in chord progression and vocal melodies.

The Black Crowes vs. Gretchen Wilson