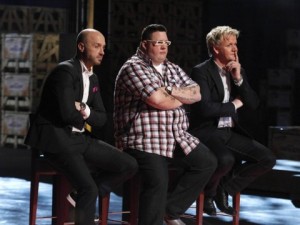 I have never in my life given a damn about cooking shows. Why? Because although I really appreciate those who can cook with grace and ease and create food that looks and tastes amazing I’m not one of those people. I can cook things I just don’t really like doing it so why would I ever watch a show about making food?

That being said I have watched Anthony Bourdain’s No Reservations, seen him speak and even read his book Medium Raw but that’s because he’s a good writer who visits cool places – not because he’s a chef. I’ve even watched the Gordon Ramsey show where he goes into restaurants and makes them better while the owners yell at him for changing their “vision” which is ridiculous considering a world-renowned chef is helping their business succeed for free. I’m not a fan of watching crazies on TV so I stopped watching that show immediately.

But regardless of all that, MasterChef – a show about amateur and home chefs trying to make cooking their profession – has become one of my weekly favorites. In addition to Ramsey, the chef judges include Graham Elliot and Joe Bastianich – two acclaimed chefs with impressive resumes that I’d never heard of before. These judges are very engaging – the importance of which I learned while watching The Voice this season. The chemistry between those judges, just like with the MasterChef judges, makes all the difference in the world.

So here’s why the show works: The judges are tough but fair, the challenges are very interesting and the contestants are fun personalities without being Real World-esque characters. Also, the show is all about people perfecting their craft. There is no “let’s see how a bunch of strangers do when they are all under one roof drinking” bullshit. Instead, we see how talented (or untalented) the contestants are and how they handle working in tough situations and whether or not they can make delicious food that is presented well.

Each week I’m excited to see see what the challenges are and which kinds will come into play such as the Mystery Box Challenge (contestants receive a number of ingredients of which they are to make a dish of their choice), the Off-site Team Challenge (contestants are split into two teams and are given a task, for example, running a restaurant or catering for a party or wedding) and the toughest one of all – the Pressure Test. Those who failed in a previous challenge are given a dish that they then must create in a particular time frame. The Pressure Test is no joke and I’ve literally seen people break down as a result of not being able to “handle the pressure.”

Obviously the challenges are meant to test the amateur chefs but it’s not for nothing. Each challenge is very creative and requires intense focus and determination on the contestants’ part if they want to succeed. The rewards (aka “huge advantages”) they receive when they do a good job are also a lot of fun – they definitely help mix things up.

Tune in one of these weeks and find out why MasterChef is so good. Not only will you be glued to the screen but you might also learn something. I know I have!