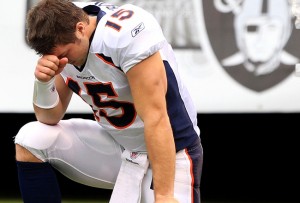 I’ve been trying to avoid writing about Tim Tebow but my friend JP Crum has given me no choice. While everyone in the English speaking world knows who Tebow is what they might not know is that the most talked about quarterback in the NFL has become a verb: www.tebowing.com

Yes, there is an entire web site devoted to photos of people kneeling down like Tebow does when something good happens in a football game that he is quarterbacking.

But let’s back up. Love him or hate him everyone has an opinion on Tim Tebow. Why? I have no idea. I really can’t figure out why people hate him unless they are: a) Hurricane and/or Seminole fans or b) Atheists. Why is Tebow like the Backstreet Boys or Creed of the sports world? Why do people feel the need to give him such a hard time?

As for me, being a Miami Hurricane fan I never liked Tebow because he was a Florida Gator and what made it worse was that he was a bible-banging Florida Gator.

That being said you can’t deny these statistics: During his 2007 season at the University of Florida, Tebow became the first college football player to both rush and pass for 20 or more touchdowns in a single season and the first college sophomore to win the Heisman Trophy. In 2008, Tebow led UF to its second national championship in three years and was named the offensive MVP of the national championship game.

Since I’ve been living in Colorado for almost 10 years I have become a Bronco fan – a fan that was sick of watching Kyle “Snoozefest” Orton lose games in the most boring ways known to man. With nothing left to lose (except viewers) the Broncos coaching staff put Tebow in and all of the sudden Denver’s beloved team is the team to beat.

There have been lots of comparisons out there between Elway and Tebow and the stats are surprising. 28 years ago Elway started 10 games as a rookie and it wasn’t pretty: Elway finished 4-6 as a starter that year. He threw seven touchdowns, 14 interceptions and completed 47 percent of his passes. Elway also had one game-winning drive during that span, something he would become known for during his career.

Meanwhile, in 10 starts, Tebow has 14 touchdown passes, six rushing touchdowns and four interceptions with his completion percentage at 48 percent. He has led the Broncos to a 7-3 record in 10 career starts and they’re 6-1 with him as quarterback. The Broncos were 1-4 when Tebow took over as the starter and now they’re tied for first place in the AFC West.

I don’t want to jinx anything by writing something positive about Tebow but this city is beside itself. They don’t know what to do with Tebow! They hate him (but can’t but their finger on why) yet they love him for winning games. These wins ain’t pretty but in the NFL a win is a win, end of story.

So we’ll see how things go when the Broncos play the Bears and then the Patriots – will Tebowmania continue or is everyone just waiting for him to make one wrong move?