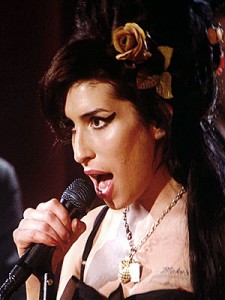 Amy Winehouse has one of the most amazing female voices I’ve heard in a long time but it looks like no one will be hearing it live anytime soon.  After an embarrassing performance in Belgrade, Serbia over the weekend she has cancelled the remaining dates of her European tour.

Her performance was so horrendous that media outlets like ABC World News Now showed clips of her stumbling and slurring her way through songs to a crowd that had no choice but to boo her of the stage.  As per usual, Winehouse looked like a drunken street hooker who had no idea where she was which is unfortunate because Winehouse has so much talent.  Like the Scott Weilands and Courtney Loves of the world, Winehouse has become better known for her nutjob antics, endless rehab stints and strange attire rather than for her voice.

She has been a regular in tabloid news since 2007 for alcohol and drug abuse and she and her former husband, Blake Fielder-Civil, were plagued by legal troubles that left him serving prison time.  In 2008, Winehouse faced a series of health complications that threatened both her career and her life.

This latest meltdown is really disappointing because this girl had so much promise.  Winehouse’s 2003 debut album Frank was critically successful in the United Kingdom and was nominated for the Mercury Prize, an annual music prize awarded for the best album from the UK and Ireland.  Her 2006 follow up album Back to Black earned six Grammy Award nominations and five wins.  That night she tied the record for the second most wins by a female artist in a single night.  Winehouse is tied with Lauryn Hill, Alicia Keys and Allison Kraus.  (Beyonce hold the record for most wins by a female artist in a single night).   Winehouse’s wins also made her the first British singer to win five Grammys including three of the “Big Four”: Best New Artist, Record of the Year and Song of the Year.

In February 2007, she won a BRIT Award for Best British Female Artist; she had also been nominated for Best British Album. Back to Black was the third biggest seller of the 2000s in the United Kingdom and Winehouse has been credited as being an influence in the rise in popularity of female musicians (i.e. Adele) and soul music and revitalizing British music.

I remember when I first heard “Rehab” on the radio – the combination of her voice with the horns in the background blew me away.  I thought for sure it was the next Aretha Franklin singing through the speakers but when I looked up who she was I couldn’t believe that voice was coming from a tiny, tattooed, white British girl who is seven days younger than me.

Unfortunately it’s all gone downhill for Winehouse and five years later we are still waiting for her big follow up. All I can say is this: Get your shit together Amy.  The record business needs talent like you making albums and performing, not getting hammered in a dark bar while shooting up heroin.