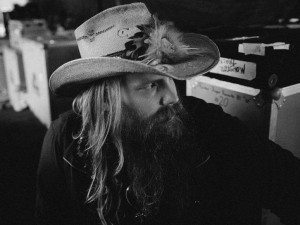 Over the weekend I watched my DVR recording of the Country Music Awards (CMAs) and quickly realized that I haven’t been paying as much attention to country music as I should because someone who I had never even heard of won all three categories for which he was nominated. Who was the mystery artist? Chris Stapleton. Clad in a cowboy hat that was so authentic there was no question it had been a few places, seen a few things, and had a few miles on it, Stapleton was a breath of fresh air. I forgave his scraggly beard because his humbleness and the utter shock that was scrawled across his face when he heard his name being called (as opposed to the fake Taylor Swift surprise face) was so sincere it brought me to tears. Yeah, I said it.

Stapleton is so rad and he doesn’t even know it. Only someone that real can get away with a turquoise bolo tie, a hat with feathers, and head-to-toe black attire. I bet his presence made the bro-country fools (who were wearing sunglasses inside like they were Puff Daddy) feel like they were just playing musicians on TV. But his appearance is just the beginning – listen to “Tennessee Whiskey” and “Outlaw State of Mind” and you’ll hear the rawness and musicianship of someone who has a few stories to tell. If it’s any indication, Miranda Lambert, who might actually be the biggest hardass in country music, was wearing a bedazzled t-shirt with Stapleton’s name on it.

Watch Stapleton show every single artist in Nashville how it’s done when he collaborated with Justin Timberlake on what was without a doubt the performance of the night:

So why are we just now hearing about the 37-year-old singer? Because he has spent the last several years writing number one songs for other artists including George Strait, Tim McGraw, Alison Krauss, Luke Bryan, Kenny Chesney, and Darius Rucker, among others. Additionally, over 150 of Stapleton-penned songs have appeared on albums by artists like Adele, Brad Paisley, and Dierks Bentley. He has also co-written with Vince Gill, Peter Frampton, and Sheryl Crow.

Finally ready to record his own music, he signed with Mercury Nashville as a solo artist in 2013 and released his first single but because it wasn’t well-received his record was never released. In May 2015, his debut solo album, Traveller, was released and earned positive reviews. Inspired by a road trip Stapleton took with his wife after the death of his father, the album was recorded in Nashville’s famous RCA Studio A. Well, it must have been one hell of a road trip because last week Stapleton won “Album of the Year,” “Male Vocalist of the Year,” and “New Artist of the Year” at the CMAs. Following his trifecta, he earned another big award – Traveller shot to number one on the Billboard 200 chart. Congratulations Mr. Stapleton – you earned it.