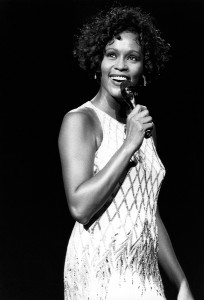 Although the last decade has not been good to Whitney Houston – she was only in the news for drug and alcohol related stories and personal drama – let’s put all that aside for a minute and remember why Whitney Houston was such a big deal. Here are 10 reasons why she is one of the biggest pop voices of all time:

-In 2009, the Guinness World Records cited her as the most-awarded female act of all time.
-Her awards include two Emmy Awards, six Grammy Awards, 30 Billboard Music Awards and 22 American Music Awards, among a total of 415 career awards in her lifetime.
-Houston is one of the world’s best-selling music artists, having sold over 170 million albums, singles and videos worldwide.
-She is the only artist to chart seven consecutive No. 1 Billboard Hot 100 hits: “Saving All My Love for You,” “How Will I Know,” “Greatest Love of All,” “I Wanna Dance With Somebody (Who Loves Me),” “Didn’t We Almost Have It All,” “So Emotional” and “Where Do Broken Hearts Go.”

-Houston’s 1985 debut album Whitney Houston became the best-selling debut album by a female act at the time of its release and was named Rolling Stone’s best album of 1986.
-Her second studio album Whitney (1987) became the first album by a female artist to debut at number one on the Billboard 200 albums chart.
–The Bodyguard’s (1992) original soundtrack won the 1994 Grammy Award for Album of the Year. With the album, Houston became the first act (solo or group, male or female) to sell more than a million copies of an album within a single week.
-“I Will Always Love You” became the best-selling single by a female artist in music history.
-Houston continued to star in movies and contribute to their soundtracks including The Preacher’s Wife (1996). That soundtrack became the best-selling gospel album in history.

-Houston is ranked as the fourth best-selling female artist in the United States by the Recording Industry Association of America.

So when all people want talk about is her drug use and her crazy relationship with Bobby Brown, put on a Whitney Houston song and listen to her voice instead. Because there will never be another one like it.