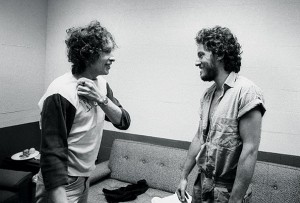 When people say “it’s not personal” sometimes it’s actually the exact opposite.  When it comes to taking photos of people, especially musicians, it’s always personal.

As a child of a photographer I know what it takes to get the shot you’re looking for and nine times out of 10 it means getting cooperation from your subject.  Musicians can be very difficult – sometimes simply because they move while they perform while other times it’s because they’ve gotten too big for their britches and have become prima donnas. Either way it takes some finesse to get the shot you want and renowned photographer Ken Regan had that finesse.

For more than 50 years Regan has captured the passion and energy of rock & roll’s most influential performers and he was able to do this because of his access to the personal side of the music industry’s biggest names.

His early work with Bob Dylan and the Rolling Stones made him the photographer of choice for historic music events such as Live Aid and Amnesty International’s Human Rights Now Worldwide benefit concerts, which of course contributed to his undeniable legacy.

All Access is a collection of Regan’s behind-the-scenes anecdotes which encompasses one of the largest rock & roll photographic arsenals.  The book includes iconic photos of Joan Baez, The Beatles, Johnny Cash, The Doors, The Eagles, Janis Joplin, Jerry Lee Lewis, Roy Orbison, Carly Simon, Bruce Springsteen, Sting, James Taylor and The Who, among others.

This is good stuff – do yourself a favor and check it out.