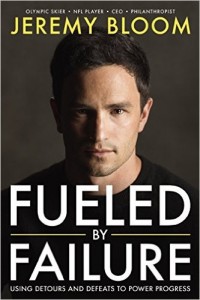 When I was a freshman at the University of Colorado, I attended my first big CU/CSU rival game which took place at Mile High Stadium. CU was down 10-0 and the coach decided to put in freshman receiver Jeremy Bloom to return the punt. I had heard about and met Bloom because he was my age and someone I knew on my door floor was friends with him or was dating him – I can’t remember which. Anyway, he returned the punt for a 75-yard touchdown and sent CU fans to their feet cheering. It was very cool seeing a player who was my year do something so awesome and so unexpected.

Following the game I learned that Bloom was also a professional skier and then later read about his legal battle with the NCAA. The organization said they weren’t going to allow Bloom to play college football and still get paid by his skiing sponsors so he took the NCAA to court and lost. As a result, he ultimately decided to relinquish $500,000 in endorsement money to play football for the Colorado Buffaloes. I remember his decision being a hot topic of conversation around CU because a lot of people thought it was insane for turning down half a million dollars. People also said that he was too small for football and he would never get any playing time. Those haters were probably shocked when Bloom proved them wrong by lighting up Mile High on his very first play. Additionally, their minds were probably blown when he played for the team for two years during which he set several school records and was named First Team All American as a punt returner.

Because of all that history, when I heard that Bloom had written a book I wanted to read it. I assumed Fueled By Failure: Using Detours and Defeats to Power Progress would talk about his dual athletic career, the ups and downs he went through, and what he’s doing now. I was sort of right. Although his book does discuss those topics, it’s more of a “how-to guide” than a book about his life. Throughout the book he provides tips on how to learn from losing, the mental aspects that one must have to succeed in sports and business, the importance of discipline, and letting things go, etc. Fueled By Failure also features anecdotes and case studies from people in his life, mentors, family, coaches and even Steve Jobs. Although those anecdotes are interesting, the way they are positioned (in boxes within the text) is distracting because he ends up interrupting his own words. Instead, those boxes should have been placed at the end of each chapter. Other distractions are the “how-to” sections such as “Five Ways Embracing Failure Can Work For You,” “Networking Through LinkedIn” and “Get A Pulse on Your Culture.” I get that he wants to show how being an athlete transitioned into him becoming a successful entrepreneur and businessman, and that some of the same skills apply to both, but the structure could have been better executed.

That being said, the stories he tells about playing football and competing in the Olympics are fascinating. The way he describes what it feels like to be part of the ultimate athletic tradition makes the reader feel like he’s telling you the story in person. I also like how he addresses and acknowledges mistakes he made and instances when his ego got the best of him. I’m also glad he spent time talking about his family and how he wouldn’t be where he is today without them. Clearly he has supportive parents who have helped him become successful and I applaud him for recognizing them throughout the book. It’s also interesting to read how he became the CEO of Integrate and the founder of the Wish of Lifetime Foundation. Although the mission of his foundation is very clear (the grant lifelong wishes for senior citizens) I still have no idea what his company does. According to the website, Integrate “was built to address the challenges marketers face today on their quest to more efficiently and effectively acquire new prospects and customers.” Apparently the company handles the following aspects of business: Workflow + Process Automation, Data Governance, Closed-Loop Analytics + Integrations and Media Marketplace. And they do so by providing these services: Media Strategy Services, Media Management Services and Platform Services. Any idea what that all means? I don’t. But I digress.

While I would have preferred less “how-to” lists and more stories about his life, Bloom did write an interesting book that is thoughtful and well-researched. He definitely uses certain buzz words too many times but he’s not an editor; he’s a former pro athlete turned entrepreneur. I hope he continues to be successful and maybe one of these days he’ll mentor or coach young aspiring skiers or football players. At 33 years old he has lots of options and the means to do whatever he wants. Even though 13 years have gone by since that first CU/CSU game, I’m still following his career and looking forward to reading more about him in the future.