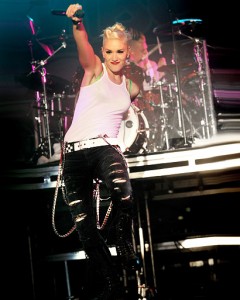 I love Gwen Stefani. Her unique voice and thoughtful lyrics caught my attention 20 years ago when I first heard songs from Tragic Kingdom – an album that is without a doubt one of my favorites of all time. Two decades later I can still listen to that record from start to finish and a lot of that is due to Stefani’s vocals. Both her music and style encompass someone who is cool and has something to say. Unfortunately, over the last few years, her music has gone from exciting rock/punk/ska to synth pop that sounds like more like auto tune than that distinctive voice.

While Stefani has always been true to her band No Doubt, she started to branch out in 2000 with her collaboration with Moby on “South Side” and in 2001 with Eve on “Let Me Blow Ya Mind.” The latter song peaked at number two on the Billboard Hot 100 and won a Grammy Award in 2002 for “Best Rap/Sung Collaboration.” Additionally, the music video won the 2001 MTV Video Music Award for “Best Female Video.”

Two years later Stefani released her debut solo album Love. Angel. Music. Baby. Met with commercial success, the record spawned three major hit singles: “What You Waiting For?,” “Rich Girl,” and the ubiquitous “Hollaback Girl” which became the first US digital download to sell one million copies. In 2006 Stefani released her second studio album, The Sweet Escape, which yielded two successful singles: “Wind It Up” (not my favorite) and “The Sweet Escape” (catchy but also not my favorite). Including her work with No Doubt, Stefani has sold more than 30 million albums worldwide and has won three Grammys, along with an American Music Award, and two Billboard Music Awards.  In 2012, VH1 ranked her number 13 on their “100 Greatest Women in Music” list.

Although I do like the song “Hollaback Girl,” I think the decline in Stefani’s music started in 2004 when she went solo. While artists have the right to reinvent themselves and try new things, it seems like with every solo record came a decrease in quality. It was almost like she was selling herself short with every album as she moved farther and farther way from the sound that put her on the musical map.

That being said there is no question that Stefani has and continues to be impressive. She is a one hell of a performer (I was lucky enough to see No Doubt live several years ago), her style is her own, she’s an excellent writer, she’s a really fun coach to watch on The Voice, and her vocals are so interesting that they characterize her persona in a way that can’t be taught. So why is she creating songs that sound like they should be sung by one of the tween pop singers who are more concerned with their Twitter page than making memorable music?

Stefani’s third solo album, This Is What the Truth Feels Like, was released on March 18, 2016 and is her worst yet. Where are the barn burner rock and roll songs? Where is that fierce voice? Although her lyrics are well-written, so far I’m hearing more backbeat than raw emotion which is extremely disappointing. Between her fashion line, divorce, kids, and new relationship with Blake Shelton she clearly has a lot to say – I just wish her sound leaned more towards rock and less towards pop. I’m hoping that eventually Stefani decides to get back to basics and remembers what initially made her the artist that everyone admired. I miss that vocal powerhouse and I’m guessing that I’m not the only one.