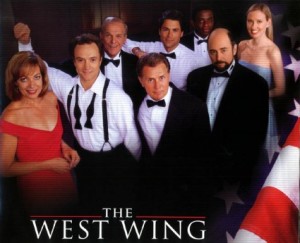 In the last few years I’ve gotten more into watching TV shows on DVD rather than movies.  For whatever reason I like finding a good show and then watching the seasons on DVD – I’ve done this with shows like Brothers & Sisters, Rescue Me, Grey’s Anatomy, 90210 and Californication, just to name a few.  If I haven’t already seen episodes of a particular show I usually download the first few from season one on iTunes and if I like it then I buy the whole season on DVD.

My most recent choice (thanks to suggestions from several people but especially Heidi) is The West Wing and surprisingly I’m loving the show.  Knowing it was a political show I was a little skeptical at first but I was also excited because I knew Rob Lowe and Martin Sheen were in it.  For those who haven’t seen the show before, it is an ensemble drama set in the West Wing of the White House—where the Oval Office and offices of presidential senior staff are located—during the fictional Democratic administration of Josiah “Jed” Bartlet (played by Sheen).  Written by Aaron Sorkin (the genius behind The Social Network) the show aired from 1999 until 2006.  It’s no surprise that Sorkin wrote this show as the dialogue is creative, engaging, fast-paced and extremely well-written.  What’s also interesting is that all these years later the show still holds up – the subject matter is so topical is could be happening now.

Additionally, the cast works very well together – so well in fact that from the very first episode I believed that they had actually been working together on a presidential campaign for years.  In addition to Lowe and Sheen there are some familiar faces including John Spencer (who played FBI agent Womack in The Rock), Allison Janney (who played the nutjob principal in 10 Things I Hate About You), Bradley Whitford (Adam Sandler’s nemesis in Billy Madison) and Moira Kelly (the bitchy, spoiled ice skater in The Cutting Edge).

Each character seems to be the best of the best in their respective fields and they are as smart as they are smart ass.  With so many people on the show it could get confusing or frustrating but it doesn’t – Sorkin leaves no room for any unnecessary, boring characters or storylines.  One of the most interesting episodes so far is the one where the staff takes the President’s daughter to a bar and when a few college boys try to get fresh the FBI is there in seconds.  It was awesome – and not a life I would ever want to lead.

From what I’ve read The West Wing received positive reviews from critics, political science professors and former White House staffers which is no surprise.  The show seems to get better with each episode.   In total, the show won three Golden Globe Awards and 27 Emmy Awards, including the award for Outstanding Drama Series, which it won four consecutive times from 2000 through 2003.

With all the political bullshit I hear about on a daily basis, whether its write-in candidates for Denver City Council or the birther issue for the millionth time, it’s nice to watch political drama that’s both interesting and fictional.  I look forward to watching the rest of season one and I hope that it continues to be as good as the first seven episodes.