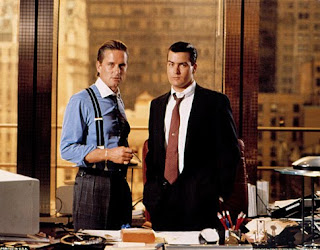 In an effort to view history before going to the movie theaters I watched the 1980s classic drama Wall Street starring Michael Douglas, Charlie Sheen, Martin Sheen (playing Dad to real-life and movie son Charlie) and Darryl Hannah (looking like a drag queen). My first impression of the movie was how astonishingly similar Charlie was to his father Martin and brother Emilio. (Emilio is not in the movie but every time I looked at Charlie I saw a bit of Young Guns Emilio).

As far as the movie goes, it is predictable put very sharp. Wall Street itself is made to look like a three right circus and Bud Fox (Charlie Sheen) is a young stockbroker desperate to become one of the big players. He struggles on his own but when he hooks up with power player and mentor Gordon Gekko (Douglas) he makes a ton of money as a result of what he is willing to do for Gekko, no matter what. Bud becomes wealthy, enjoying his mentor’s promised perks, including a penthouse on Manhattan’s Upper East Side and a trophy blonde, interior decorator Darien (Hannah). He even begins dressing like Gekko – suspenders and all. At one point Bud does ask himself “Who am I?” but doesn’t seem to change his tune until his mentor decides he wants to buy Bud’s father’s company, sell it off in pieces and take away the jobs of all its employees – including Bud’s father, Carl.

Before this happens Carl warns Bud about Gekko but Bud is convinced that his father is just a blue collar worker and Union president who could never make it to the big time. Eventually Bud realizes his father’s instincts are right when Gekko wants to destroy the very company his father has helped build for the last 24 years.

While the acting is superb (Douglas won an Academy Award for Best Actor) the technology, especially the computers and phones, are extremely dated to say the least. I forgot how good looking the Sheen men are and how handsome Douglas was in his heyday. While the film is full of snappy one-liners the big phrases are “greed is good” and “money never sleeps” which are, as the new trailers have indicated, carried into the recently released sequel.

I can’t wait to see Wall Street: Money Never Sleeps for several reasons: 1) I appreciate the fact that the studio moguls waited 23 years for a sequel rather than the usual move which is to spit out another sequel as soon as humanly possible. 2) The first movie was good and pretty much left the door wide open for a follow-up so I’m very curious to see what happens next. 3) Even though I think Shia LaBeouf is kind of a tool I’m interested to see what he does with what I assume to be a protégé role similar to Charlie Sheen’s.

Whether or not the sequel measures up to the original remains to be seen but if the acting and dialogue is as good in 2010 as it was in 1987 then I’ll buy into Gordon Gekko’s bullshit all the way to the theater.