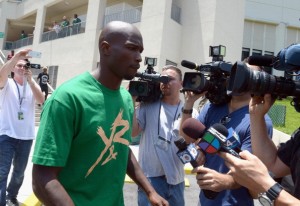 What is it about these professional athletes who garner press for changing their names to something ridiculous and then end up getting more press for doing something even more ludicrous – i.e. hurting people. On April 25 I wrote a post called “Artest The Menace” in which I called out Ron Artest (aka Metta World Peace) for purposefully injuring James Harden and virtually getting away with it. Well, that is not the case with Chad “Ochocinco” Johnson.

Johnson was arrested this weekend for domestic violence after he allegedly head-butted his wife, Evelyn Lozada, in front of their home. Johnson was arrested after police found Lozada with lacerations on her forehead. She told police that she confronted her husband after finding a receipt for condoms in the trunk of their car, which turned into a heated argument. She later fled to a neighbor’s house and called 911. Johnson was released yesterday on $2,500 bond after spending the night in jail.

According to reports, Johnson, who was selected to the NFL Pro Bowl six times and named an All-Pro three times, claims he “accidently” bumped Lozada’s head with his. Riiiiight…and Ron Artest “accidentally” gave James Harden a concussion.

The difference between Artest and Johnson is that the latter is facing serious consequences for his actions. The Miami Dolphins dropped the wide receiver from his contract and VH1 announced it would not air the couple’s reality show, Ev & Ocho, even though it has already finished production and was slated to premiere on September 3.

Not only is Johnson unemployed, but now he is going to have to deal with a domestic violence reputation and is facing a maximum penalty of one year in jail and a $1,000 fine if he’s convicted.

With so much social media going on these days, sports teams, televisions networks and other sources of entertainment don’t screw around when it comes to public image – something Johnson should know considering in April 2011, CNBC listed the then-Ochocinco as #1 on the list of “Most Influential Athletes In Social Media.” Everyone and their mother has an iPhone, camera phone, Facebook page, Twitter account, etc. and information spreads incredibly fast. There was no way this wasn’t going to get out and both the Miami Dolphins and VH1 were clearly looking to make an example out of Johnson.

It will be interesting to see what happens next. Will Johnson get convicted? Will another team pick him up or is his professional football career over? In the meantime, I highly recommend that athletes keep their given names and keep their hands, feet, objects and foreheads to themselves.