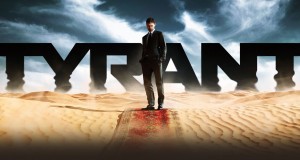 Have you seen FX’s new show? I’m assuming the answer is no because so far the reviews have not been the best and for some reason any kind of promotion has been non-existent.  Not sure why that’s the case considering FX prides itself on pushing the television envelope i.e. Sons of Anarchy, Justified, American Horror Story, Louie, etc. All of those shows are meant to keep eyes glued to the screen and Tyrant is no different.

Created by Israeli director, screenwriter and writer Gideon Raff (Homeland) and developed by Howard Gordon and Craig Wright, Tyrant is about the Al Fayeed family who run the fictional war-torn country of Abbudin. The dictator father has two sons – Jamal (eldest and horrible) and Bassam aka Barry who has been living in self-imposed exile in Los Angeles for nearly 20 years where he has a beautiful family and a job as a pediatrician. Barry returns with his family to his homeland to attend his nephew’s wedding and upon arrival is confronted with all the reasons he left the country in the first place – terrifying national politics and difficult familial politics.

The audience’s first introduction to Jamal (aka the devil) is him aggressively driving his Ferrari through town while blasting Aerosmith (I wish they had chosen a different band). Next we see him raping a woman while her husband and children listen at gunpoint outside the room – an awful scene. He is one of the most despicable characters I have ever seen on television and honestly makes the show difficult to watch. In fact within the first three episodes we see him rape three women total – including his son’s brand new wife who was a virgin. And the violent acts don’t end there – through Barry’s childhood flashbacks we see his father force him and his brother Jamal to shoot people in the head. Those kids were probably eight and 10 years old.

After the wedding Barry decides it’s time to get back to America and immediately gets on the next airplane with his wife and two children. But because the family runs the country, the plane is stopped and here come the military to escort them back to the palatial Al Fayeed compound. Next thing we know Barry’s father passes away (making horrifying Jamal the president) and someone tries to kill Jamal. Dismayed by the disarray, Barry decides to stay in Abbudin and is quickly appointed by Jamal as special counsel to the president.

Clearly the Californians are not going anywhere for a while and it’s a shame because it seems like this change of address is going to tear the family apart. Although I like that Barry immediately calls his brother out for being the insane, atrocious person that he is, how much can Barry really do? I’m going to keep watching the show until it becomes too much for me (I never finished the final season of Sons of Anarchy) which I’m just assuming will happen. Hopefully I’m wrong and the show does more with the story line and character development and less with graphic images – sometimes there’s only so much FX I can handle.