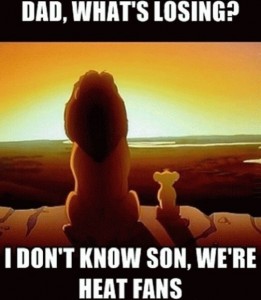 While The Voice and the NBA Finals couldn’t fall on more opposite sides of the television spectrum, I watched both events last night and as assumed, they were both nail-bitters.

Let’s start with The Voice. Clearly I’m a fan as I’ve written about this show many times, but this season I think the show went on for too many weeks. At some point the judges don’t have anything new to say and it gets repetitive. I’m also annoyed that Danielle Bradbery, a cookie-cutter teenage girl from Texas who had never performed on a stage before in her life, won over someone like Michelle Chamuel who has talent, heart and a style all her own. No question that Bradbery has a killer voice but it was like The Voice took the American Idol easy way out by doing a little bit more to promote Bradbery instead of someone who really does bring a new voice, look and style to music. I know it was ultimately America’s decision but come on!

-Watching the Swon Brothers trade versus and chords with the legendary Bob Seeger in a stripped down version of “Night Moves” was the highlight of the show. The three of them sat on stools with their acoustic guitars and had the attention of every single person in the room and at home.
-Cher looked like she was on some kind of sedative as she awkwardly sang “Woman’s World” in her peacock and leather crazy outfit. What a nutjob!
-Christina Aguilera’s song with Pitbull sounded like a bad version of a Kesha song on auto tune. You have a multi-octave voice that rivals Whitney and Mariah – why are you singing club jams?
-As much as I love Blake Shelton and want to be friends with him he needed to put down the moonshine last night – clearly that was not cowboy coffee in his cup.

On to the Heat! In a win-or-go-home scenario no team plays better under pressure than this Heat lineup but as the fourth quarter was waning I was worried. Really worried. The San Antonio Spurs aka The Most Boring Team in NBA History could not take this from us. No way. Following a pivotal offensive rebound and assist from Chris Bosh, 37-year-old Ray Allen hit a three-pointer that tied up the game with five seconds left in regulation.

Was I surprised that Allen made the shot? Hell no – the guy holds the record for most three-pointers in NBA history clocking 2,850 in his 17-year career. That being said the Miami Arena is no joke and neither is game six of the NBA finals when your team is down. So thanks to Allen’s heroic performance and some gnarly blocks by Bosh, the Heat came out ahead in overtime by the skin of their sneakers, 103-100, extending the dramatic series to game seven. Now that’s good television! And by good television I mean my dog was looking at me like I was insane as I repeatedly screamed at the flat screen and I was worried my mother was going to have a heart attack. Thanks for the drama Miami!

Danielle –I hope you do well, make a career for yourself and decide not to be like other teen pop stars out there who shave their heads and can’t handle the pressure. Michelle and the Swon Brothers – I think you will have no problem succeeding in the biz. You guys are amazing.

In the meantime see ya tomorrow at 7 p.m. Mountain Standard Time for the final showdown. Let’s go Heat!