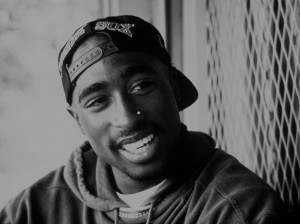 I bet that’s a headline you never thought you’d read!

And for multiple reasons – a) He’s dead and b) Tupac Shakur and Broadway? Really? Next you’re going to tell me they’re going to bring him back via hologram at a music festival? Oh wait….

But all kidding aside, Tupac’s music really is going to be featured in an upcoming musical called Holler if Ya Hear Me, which is slated to hit Broadway in the 2013-14 theater season.

Produced by Shakur’s mother, Afeni Shakur, the musical is an original story about two childhood friends in a fictional Midwestern industrial city as they struggle to achieve their dreams in the face of tough circumstances. According to director Kenny Leon, Holler is a present-day musical using Tupac’s music but the rapper is not a character in the musical. Choreography will be handled by Tony winner Wayne Cilento (Wicked, Sweet Charity). The musical is currently being workshopped but no theater or casting has been announced.

Although gangster rap and Broadway don’t usually mix, Tupac was a huge artist while he was alive and continues to be close to 20 years after his death. Shakur has sold over 75 million albums worldwide making him one of the best-selling music artists in the world. MTV ranked him at number two on their list of The Greatest MCs of All Time and his double disc album All Eyez on Me is one of the best-selling hip hop albums of all time.

Shakur began his career as a roadie, backup dancer and MC for the alternative hip hop group Digital Underground (yeah, that’s the group that spawned “The Humpty Dance”) before eventually branching off as a solo artist (good call Tupac). Both of his parents and several other of his family were members of the Black Panther Party, whose ideals were reflected in his songs.

During the latter part of his career, Shakur was a vocal participant in the East Coast/West Coast hip hop rivalry, becoming involved in conflicts with other rappers, producers and record-label staff members, most notably The Notorious B.I.G. and his label Bad Boy Records. On September 7, 1996, Shakur was shot multiple times in a drive-by shooting in Las Vegas, Nevada and was taken to the Southern Nevada University Medical Center where he died six days later. He was 25 years old.

While the posthumous musician/singer/artist argument about whether an artist is idolized because they died at such a young age and are therefore frozen in time and always thought of as being that age forever, there is no question that Tupac was a great rapper and that he died at the height of his career. It’s a shame that he has missed out on having a career like Dr. Dre, Jay-Z, Snoop Lion, etc. but whoever is in charge of his estate is still rolling in the cash. Check out the list of posthumous solo album releases:

Tupac has released more albums after his death than some living artists release in their entire lifetime. Strange but true.

And if people think that the day rap music invades Broadway is going to be the day that musicals died think again. Critics said the same thing about punk rock and Broadway and look at how well Green Day did with American Idiot on the big stage. The musical won two 2010 Tony Awards and received a nomination for Best Musical. In 2011 it won a Grammy Award for Best Musical Show Album.

Bring it on Tupac – you would have turned 42 last week and I’m assuming would still be turning out the hits if you were still with us.