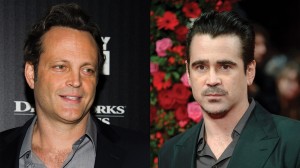 Vince Vaughn and Colin Farrell. HBO could have announced Krusty the Clown and Rainbow Brite as the two people “replacing” Matthew McConaughey and Woody Harrelson on True Detective and I would have been less surprised! Ok maybe I’m exaggerating a little bit. But seriously – as much as I like him, I’m having trouble picturing Vince “Vegas-Baby-You’re-So-Money” Vaughn starring in a television show that was so gritty in season one that sometimes I had to look away from the screen. And although Colin Farrell has always been fun to watch on screen and has conquered some more serious, high-action roles i.e. Phone Booth, SWAT, The Recruit etc. I would not have pictured him as one of the hardcore detectives who were tougher than most characters I’ve seen on television. Also, neither actor has ever done a television series.

All this being said I really like both Vaughn and Farrell. Some of my favorite comedies of all time feature Vaughn (Wedding Crashers, Swingers, Old School) but I always think of him as the fast-talking funny dude who creatively verbalizes his way out of comically tough situations.  Then again before Dallas Buyers Club and True Detective McConaughey was Mr. Romantic Comedy so miracles do happen.

In addition to today’s casting announcement, HBO also revealed that season two will feature eight, one-hour episodes in which “three police officers and a career criminal must navigate a web of conspiracy in the aftermath of a murder.” Vaughn is slated to play Frank Semyon, the career criminal who is in danger of losing his empire when his plan to go legit is derailed by the murder of a business partner. Meanwhile, Farrell will slip into the role of Ray Velcoro, a detective torn between both sides of the law.

Regardless of their respective acting resumes, Vaughn and Farrell have demanding shoes to fill. McConaughey and Harrelson commanded every scene, had incredible on-screen chemistry and were given well-written backstories which lead to two awards from the Television Critics Association and five Emmys. Similar to season two, season one was comprised of eight, one-hour episodes so at least these actors will be dealing with the same numbers.

Season one of True Detective was arguably television perfection as it included backstories, flashbacks, phenomenal acting and writing that made the viewer count the minutes before the next episode and a story arc that was creative and complex but finished without any Lost-type questions. While it’s clearly a completely different True Detective with new characters and new story lines, hopefully season two does the show justice.