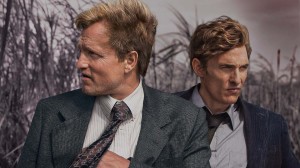 Although HBO always does a great job with their shows (good point Kirsten Wechsler) there are some I watch and some I don’t. While certain people swear/swore by Game of Thrones, Girls and The Sopranos, I will forever be a fan of Sex and the City, Entourage and The Newsroom. Recently I read an article about True Detective which talked about how movie stars Woody Harrelson and Matthew McConaughey were lighting up the small screen so I thought I’d check it out. With trepidation I say I’m glad I did. Why with trepidation? Because although Harrelson and McConaughey absolutely deserve Emmy awards for their performances, this show is as dark as it is brilliant.

Using multiple timelines to trace two Louisiana State Police Criminal Investigations Division homicide detectives during their hunt for a serial killer, the show goes back and forth between crucial time periods in the lives of both men. Crossing 17 years of logic, violence, family issues and head trips, this show features one of the most intense storylines I’ve seen on TV in a long time.

Centered around Harrelson’s Marty Hart and McConaughey’s Rust Cohle – both of which have some serious cerebral issues – the story is as tangled as it is hard to watch. In the mid-90s they went to insane lengths to catch a killer who raped, posed and killed a woman in a horrifying manner – all of which is shown in flashbacks. In present day (2012), Hart and Cohle are shown being interviewed independently by the same two detectives. Later we find out this is happening because there is a suspicion that the real killer is still out there.

In addition to watching the hardships these two men endure to solve this case, we watch how it affects their personal lives. For family man Harrelson, his demons primarily include alcohol and fidelity as he betrays his wife and two daughters in multiple ways. Meanwhile, McConaughey’s character has seen some serious shit and has been through more than his share of horrific situations including going undercover for years which required doing hard drugs with deadly criminals.

At first the two detectives don’t really get along, as they seem too different to possibly understand one another, but as years go on they realize they need each other. For better or worse. Although the back and forth between the two characters is interesting and sometimes mildly comedic, this show is extremely dark. The people they come across – white supremacists, gang bangers, rapists, whore house madams and other horrifying humans – are enough to make your skin crawl. But then when they are forced to interact with these people in an effort to get information on the suspects they are trying to put away, it gets even worse.

So why watch True Detective? Because Harrelson and McConaughey are brilliant. Absolutely brilliant. They are hardcore, raw and incredibly conflicted. The hair and makeup job required to make Harrelson look younger and McConaughey to look like a methed-out truck driver is as impressive as the acting that goes with it. As a viewer, I believe they used to be young guns and I also believe that they are bruised and battered former cops who are passed their prime and hardened to the world. It’s an incredible transformation that could only be achieved by actors who are as good as these two.

What’s the bottom line? Watch the show but be prepared to watch HBO-level hardcore drama that shows some of America’s most unfortunate bottom feeders. It’s hard for me to see how some of these people live their lives and what these detectives put themselves through to make sure these people never repeat their crimes but the acting and gripping storylines are worth it. True Detective is exactly as advertised – a true depiction of what goes down when life gets real.