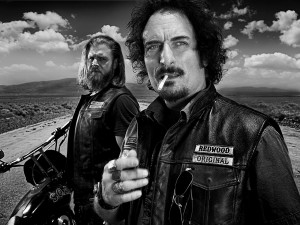 Why are such horrible things happening on my favorite television shows? I know that dramas have to keep it interesting with epic events and a lot of times that includes death – especially when a character is leaving a show – but I feel like the fall TV season has started off in a very dark way. A few examples:

Sons of Anarchy – Throughout the first few episodes we have watched Tig’s daughter get burned alive in a trench surrounded by other dead bodies and Jax’s best friend Opie get beaten to death in prison. Both equally gruesome and incredibly difficult to watch and I’m finding myself trying very hard (unsuccessfully) to get the images out of my head. Just awful.

Grey’s Anatomy – During the first two episodes of its ninth season, we have seen a major character die (the beloved Mark Sloan) and listened to the gruesome details of wild animals fighting over Lexi’s (sister of Meredith Grey) body in the woods. More horrifying images I’m trying to get out of my brain.

Revenge – In the much-anticipated premiere of this dark but very interesting and clever show, it is revealed that Emily/Amanda’s mother was wrongly put away in a mental institution and she may or may not have survived. Seeing the flashback footage of a very young Amanda visiting her mother in a gruesome hospital with restraints on all four limbs was extremely sad to watch.

Now I know that I choose to watch these shows and I realize that they are dramas, which by definition means that not everything is going to rainbows and happy faces, but in the beginning episodes of their respective seasons these shows have brought some dangerously bleak storylines and events to the forefront. I’m just saying that sometimes there needs to be silver linings here and there – even if they’re minor.