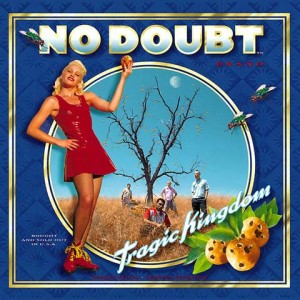 Do you remember where you were when you first heard No Doubt’s Tragic Kingdom? I do – at the listening station at one of my family’s record stores in Miami, Florida. I remember looking at the colorful album cover and thinking I can’t believe I’ve never heard this band before so this must be their first album. It’s not. Tragic Kingdom is actually No Doubt’s third studio album and it was released 20 years ago this month on Trauma Records, a division of Interscope Record. It’s also the final album to feature original keyboardist Eric Stefani (brother of Gwen) who left in 1994 which is worth mentioning since it’s their most popular album.

Anyway, between 1995 and 1998 the album produced an astonishing seven singles including “Just a Girl,” “Spiderwebs” and “Don’t Speak” which all charted on the Billboard Hot 100. Other popular singles included “Excuse Me Mr.,” “Sunday Morning” and “Happy Now?” All these years later it makes sense that “Don’t Speak” is still their most recognizable song considering it spent 16 weeks at the number one spot on the Billboard Hot 100 Airplay chart.

At the 39th Annual Grammy Awards, No Doubt earned nominations for Best New Artist and Best Rock Album. Tragic Kingdom has sold over 16 million copies worldwide and was certified diamond by the Recording Industry Association of America in the United States. The album is also ranked number 441 on Rolling Stone magazine’s list of the 500 greatest albums of all time.

So why is Tragic Kingdom still relevant 20 years later? First of all, like Alanis Morissette’s Jagged Little Pill, the entire album is excellent. From start to finish. Second, No Doubt, along with Sublime, brought ska-punk to the mainstream and showed the music-listening community that punk rock could be fun (rather than just loud) and could consist of more than just three chords.  Also, at the time, there weren’t many rock bands that had a female singer and backed by males and Stefani was impossible to miss. Still is. To this day her style is unlike any other female in rock and although most would say that Madonna is the queen of transformation and reinvention, I’d give it to Stefani hands down. Even more importantly, she can write. Listen to the lyrics on Tragic Kingdom – while the songs are definitely catchy, a lot of thought went into those words and there is a great deal of emotion behind them.

We all know that the songs are mostly about Stefani’s breakup with ex-boyfriend and bandmate Tony Kanal and it shows. Again, like Morissette’s Jagged Little Pill, No Doubt’s Tragic Kingdom was written by a female artist with a lot to say who was backed by three very talented male musicians. Bassist Kanal, guitarist and producer Tom Dumont and drummer Adrian Young are a well-oiled machine who even in their twenties knew how to put together a killer album.

Although the entire band is talented, like the music video for “Don’t Speak” clearly depicts, Stefani unquestionably became the big star. Her exceptional voice, unique look and sensational lyrics have always overshadowed the other band members and it’s safe to say that 20 years later nothing has changed. Still there is no denying the impact of Tragic Kingdom because all of those songs still hold up. Happy anniversary No Doubt – thanks for all the memories.