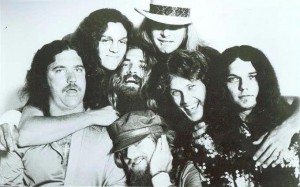 On October 20, 1977, an airplane chartered by Lynyrd Skynyrd ran out of fuel and crashed in Mississippi, near the end of its flight from South Carolina to Louisiana. Lead singer Ronnie Van Zant, guitarist/vocalist Steve Gaines, backing vocalist Cassie Gaines (Steve’s older sister), assistant road manager Dean Kilpatrick, pilot Walter McCreary and co-pilot William Gray all died as a result of the crash.

38 years later, tragedy haunted another member of the band as Robert Lewis Burns Jr., Lynyrd Skynyrd’s original drummer, died on April 3 in a car crash. He was 64 years old. According to local police, no other cars were involved in the crash which occurred shortly before midnight.

Burns was part of the genre-defining band’s original lineup, which formed in Jacksonville, Florida in 1965. Although Burns left the band before the release of its third studio album, 1975’s Nuthin’ Fancy, he was part of iconic hits such as “Tuesday’s Gone,” “Gimme Three Steps,” “Simple Man,” “Free Bird” and “Sweet Home Alabama.” He also performed with the band for its 2006 induction into the Rock and Roll Hall of Fame.

Van Zant started the band, originally called Noble Five, with Burns, guitarists Gary Rossington and Allen Collins and bassist Larry Junstrom in their hometown. The band later made a name change which is a reference to a high school gym teacher.

Hopefully this ends the grief for the members, friends and family of Lynyrd Skynyrd – rest in peace Mr. Burns.