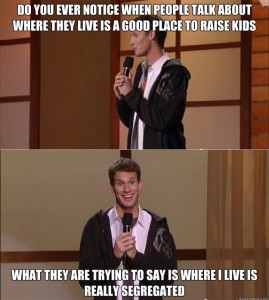 While Daniel Tosh is not the first stand-up comedian I’ve seen live, he is the first I’m writing about. And turns out, it’s hard to review a stand-up comedian because unlike concerts, there isn’t certain material that you’re expecting to hear. You’re not hoping for your favorite song or wondering if the person is going to play acoustic or electric guitar. Instead you’re just hoping the person is going to be as funny or funnier than they are on their television shows.

On Saturday night, at a 5,000-person capacity venue in downtown Denver, four of us went to see Tosh live. His opening act was very good – something we weren’t expecting because you just never know with opening acts – and then came Tosh. Dressed in jeans, a blue button down shirt, a five o’clock shadow and possibly last night’s hangover, he looked rough. Clearly the producers shine up his face a bit on Tosh.O but that’s television – no big deal. I also noticed his enormous hands and did think it was very cool to see him in person. Before writing this post I looked up his age and was surprised to learn that he recently turned 38. For some reason I thought he was a bit younger but what do I know.

Anyway, with no videos to reference or YouTube clips to mock, it was interesting to watch him casually move around the stage and do his approximately 90-minute routine. He seemed relaxed and happy to be there and, as per usual, was not afraid to say some dark, opposite-of-PC stuff. He commented on family, relationships, other countries, a variety of races and religions, etc. He even made fun of how people in the audience react to his jokes by “wooing” instead of just laughing. Without question Tosh brought his balls to Denver and I’m assuming he brings them everywhere he goes because he is anything but censored.

I will paraphrase one of my favorite parts of the show: He was talking about China and how it is a better country than America but gave a disclaimer saying that he is not anti-American. “Chinese people are amazing – they get up at four in the morning and practice violin, then they do math for hours and hours and then at night they are ninjas!”

While Tosh has no qualms about making uncensored remarks, he did remind us to not take what he says out of context because he didn’t want us going home and writing nasty things on our blogs. Clearly he was alluding to an incident last summer when a blog titled Cookies for Breakfast published an account by an unnamed woman in which Tosh made a series of jokes about rape at the Laugh Factory. According to the blogger, after she called out “Actually, rape jokes are never funny!” Tosh responded, “Wouldn’t it be funny if that girl got raped by, like, five guys right now?” Later that day Tosh claimed the blog post was inaccurate and that he was misquoted, but apologized on Twitter for what he said. The owner of the comedy club, who was present during Tosh’s set, stated that the blog’s account of the incident was inaccurate but the event received a degree of media coverage, with anti-sexual assault groups arguing that his actions normalize sexual violence.

While I obviously don’t think rape is funny, you have to realize what you’re getting yourself into when you go to a Tosh show. He is not going to be nice, he is going to be inappropriate and you’ll probably have more fun if you check your PC mind at the door. If you’re offended easily, stay at home and if you don’t like his show you will not like his stand-up because there is no edit function. Overall we had a great time at the show and laughed the entire time – there is a reason he has a popular show on Comedy Central and over nine million Facebook friends. Unapologetic, unafraid and sporting a razor-sharp tongue, Daniel Tosh is definitely worth your time and money.