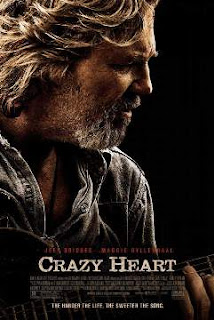 9) You have to do a double take to make sure Bridges isn’t Kris Kristofferson.

7) As Bad sings, “I’ve been blessed and I’ve been cursed, all my lines have been unrehearsed” you can feel his hard history.

6) Journalist Jean’s (Maggie Gyllenhaal) heart bleeds for Bad and she makes ours bleed for her.

5) Bridges’ ability to portray Bad’s inability to stay on track and out of trouble.

4) You root for Bad even though it takes every ounce of his strength to simply talk and breathe between shots of whiskey.

3) Bad says he plays “sick, drunk, divorced and on the run” and you believe him.

2) Stories of redemption are always interesting, especially when there is a soundtrack full of heartache and grit to back it up.

1) Bridges makes an alcoholic-four times divorced-outlaw country singer who is forced to play in dive bars and bowling alleys one of the most charismatic and likeable characters I’ve seen in a movie in a long time.