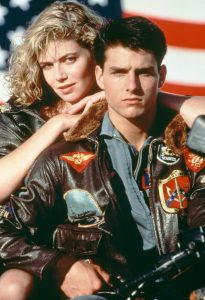 Three decades have passed since one of my favorite movies was released in theaters (yes, I know I was only three years old at the time but who cares) and now there are rumors that Jerry Bruckheimer and Tom Cruise are both on board for Top Gun 2.

Apparently Bruckheimer and Cruise were in New Orleans together discussing the possibility of a sequel but who knows if that’s even feasible. Although Cruise is clearly in excellent shape (he looked great in last year’s Mission: Impossible – Rogue Nation) the actor was 24 years old when Top Gun debuted to the world and obviously a lot has changed since then. In terms of plot there are several questions to consider including: What would they do about Goose’s widow (played by Meg Ryan) and his son? Maybe his son joins the Navy to pay homage to his dad! Is Val Kilmer in shape to play Iceman? Would Tom Skerritt be available? Has anyone really seen Kelly McGillis since Top Gun? At this point would all the young, hotshot fighter pilots from the original now be teaching a new crop of pilots how to fly F-14s? Will Maverick be the new Viper?

It will be interesting to see what happens and if any of this is realistic. I just watched the new Point Break and, although it was meant to be a remake and not a sequel, it was hard for me to not think about the 1991 classic film (another one of my favorites). That being said, over the years some excellent sequels (i.e. The Dark Night, Spider-Man 2, Indiana Jones and the Last Crusade) have been made but the key to their success is writing a worthy plot, making sure that the big stars return, and timing. Thirty years is a long time to be “waiting” for a sequel – especially for a movie as iconic as Top Gun.

I recently read that although the film initially didn’t test well among audiences, it ended up earning $177 million in the U.S. (and another $177 million internationally) during its initial theatrical release. It also went on to win an Academy Award for Best Original Song for Berlin’s “Take My Breath Away,” spawned numerous video game adaptations, and earned a place in the Library of Congress’ National Film Registry. While there is no denying Top Gun‘s impact, the question of a sequel’s likelihood still remains.