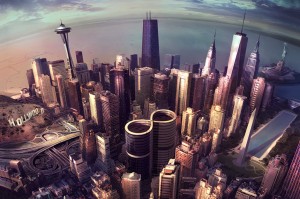 Set your DVRs for the next seven Fridays because that’s when episodes of the Foo Fighters’ documentary series “Sonic Highways” will be on HBO and it’s imperative that all music fans tune in. The eight-episode series covers the band’s journey to eight cities to record eight songs for their eighth studio album of the same name. Each episode is one hour and focuses on the musical history and current state of music of the particular city discussed. “Sonic Highways” kicked off in Chicago and if that first episode (which aired a few days ago) is any indication, this is going to be Dave Grohl’s best work yet.

Whether you are a Foo Fighters fan or not watch this documentary series. It’s fantastic and here’s why:

5) Dave Grohl is always looking for new inspiration and that drive inspires the people around him, his band members, Foo Fighters fans and anyone who loves music.

3) At the end of the each episode the band performs the song Grohl writes about the particular city being highlighted. The song written about Chicago is called “Something From Nothing” which discusses Buddy Guy breaking into the blues scene and how punk rock found its voice. Exemplifying this project’s authenticity, Grohl uses a direct quote from Buddy Guy’s interview in the song.

2) Watching the band converse with people who helped create the music scene in these cities and then writing about them allows the audience to see the arc of a song’s creation. I found this fascinating since we literally get to see and hear who and what Grohl writes about and why.

1) Backstories are the best stories and I can’t think of something more intriguing then the backstory of how an album gets made.

Air dates for each episode:

This Friday the band heads to Washington, D.C. and I can’t wait to hear what they come up with next!